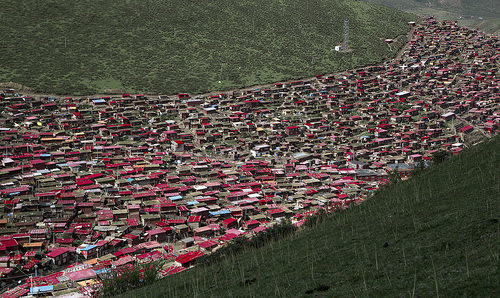 BEIJING (AP) — China has appointed Communist Party and government officials to manage one of the world’s largest centers of Tibetan Buddhist learning, raising concerns over strengthened ideological control over religion that critics say is draining such institutions of their vitality.

The appointments at Larung Gar in southwest China are the latest sign of Beijing’s distrust of members of the Tibetan Buddhist clergy who embody the region’s traditional culture and beliefs.

Related: The spectacular Sertar is about to be destroyed , Sky Burial, the macabre Tibetan ritual dissection

Those appointed to top positions by the personnel department of the Communist Party in Garze Tibetan Autonomous Prefecture include the prefecture’s former deputy police chief, the website of the party mouthpiece People’s Daily reported this week. All apparently ethnic Tibetans, they will serve as the head and deputy head of the Larung Gar’s party committee.

“The appointments will help the school operate in accordance with laws and will not affect its teaching, since the officials will be administrators,” Penpa Lhamo, deputy head of the contemporary studies institute of the Tibet Academy of Social Sciences was quoted as saying by the Global Times on Thursday.

Despite that, the presence of party officials in temples, monasteries and nunneries brings new demands, especially that monks and nuns attend “patriotic education” classes that seek to instill patriotism but take precious time away from religious study.

Founded in 1980 by prominent monk Jigme Phuntsok, Larung Gar has attracted increasing official attention in recent years, with the authorities currently carrying out a drive to cut the number of residents living there by half to 5,000, largely through housing demolitions and evictions. Authorities say they are merely clearing routes for firefighting equipment.

Overseas Tibetan groups say such campaigns show how authorities want to contain the spread of Tibetan Buddhism, which has grown popular among Chinese beyond traditional Tibetan areas such as Garze, which sits in the western mountains of Sichuan province.

Several United Nations special rapporteurs wrote to the Chinese government in November to express concern about “serious repression” of Buddhist Tibetan cultural and religious practices in the region.