The United States has already blocked the way for a number of technological sectors, now more than ever.

Australia is certainly more welcoming than the United States from this point of view, but it is wary of China’s greater size, Germany and Iran appear in the ranking for older issues, while Russia and Nigeria had  seen recent setbacks.

All regions of the world have seen a decrease in Chinese investments in 2018, except for one, namely the Middle East and North Africa (MENA).

In the last three years, a series of projects in this region has effectively made this area a key partner at the geo-political level.

In 2018 alone, investments in the area have grown so much that it has quickly transformed the region as the second destination for investments Chinese, after Europe, with an investment of 28.11 billion dollars.

Almost three quarters of the total investments in the region were destined for Egypt, the UAE and Saudi Arabia.

These three countries are also part of the “20 billion group” or a group of states with more than 20 billion Chinese investments since 2005.

The region, it goes without saying, acquires strategic importance due to oil drilling, with the ‘exception of Egypt. 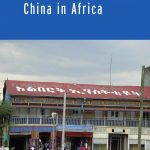 Among the projects in Egypt, the two governments are planning to build a new capital next to Cairo, where 5 million people should live, not without problems, and projects related to the Suez Canal, which has already attracted strong Russian investments.

A new hub for Chinese goods will also be built in the port of Jebel Ali in Dubai, with a $ 3.4 billion project.

Other major trade hubs for China in the region are Israel (12 ,19 billion dollars) and Qatar (7.27 billion dollars), according to data analyzed by the American Enterprise Institute’s China Global Investment Tracker.