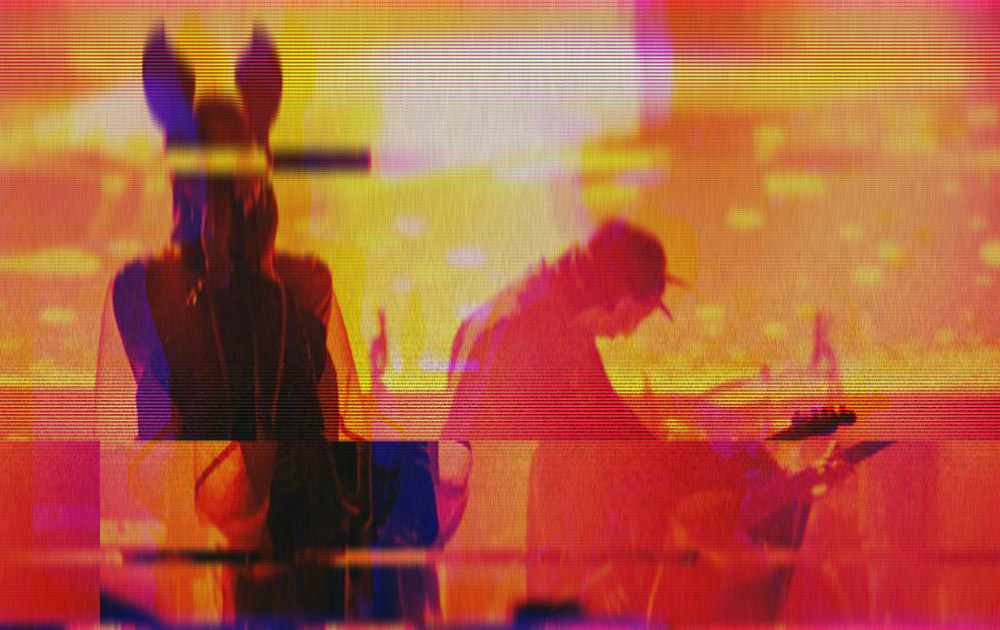 GUIGUISUISUI is a two-piece journey into sound and performance.

Man and woman, East and West, past and future, side by side blending electronic and 8-bit sounds with blues, rock, hip-hop, doom, punk, noise, and ambient bliss while performing an Avante Garde opera featuring a number of characters: the zombie bluesman GUIGUISUISUI and immortal ninja SUSU; master of the dark arts KING NECRO and empress of the underworld PUMPKIN QUEEN; preacher and minister for the cult of greed LORD KAMEMAMEHA and high priestess of profit LADY CHAKRA. Meanwhile, a journey through time and space plays out in the background through painstakingly detailed animations that explore the themes of life and death and rebirth.

China-underground: How did you meet and how did you understand that you want to play together?

GuiGui SuiSui: We met outside the hotbed of artistic, intellectual, and romantic encounters in Beijing known to most as Temple/Dada, through a mutual friend. Su had actually seen Dann perform as Guiguisuisui previously but she didn’t recognize him without his makeup. At the time Su wanted to start a new band (she had a band called Clown Baron when she was at university in Chongqing) and after talking about this a lot Dann said she should just join Guiguisuisui.

How did you choose the name of your band?

The roots of the name come to Dann’s father, who is a musician in the UK. For around three decades he has been the one constant member of a band named Sneaky, which translated into Chinese is鬼鬼祟祟. It works on a deeper level as the meaning of the characters and its connotations suggest supernatural elements, which fits the aesthetics of the band.

How long have you been playing together?

Guiguisuisui has been around since 2012, we’ve been playing together as a duo since 2015. Since 2016 we’ve also both been in another band called Nekroma.

What are your main musical influences?

So many and it’s not just music, it can be the sounds of the world, the things we see, the landscapes on the subconscious, all of these are influences. Recently it’s been a lot of Brian Eno and some darker ambient works, vintage doom bands like Witchfinder General.

Dann co-runs the Nasty Wizard label so it also tends to be a lot of what has come out on the label, and also tapes that we get sent. Dann recently got a really nice tape from Canada called United Power Soul, it sounds like James Brown, he’s really enjoyed that whilst cooking recently.

Another favorite tape to cook to is Guzz on Taxi Tapes, the Do Hits guys are amazing, that is another recent influence on Dann and the kind of music he’s making: dark, trippy, glitchy beats that have a strong foundation in the place they were made.

On the other hand, Su listens to a lot of upbeat dance music and techno when she’s at the gym and more poppy stuff at home, yet also Bjork and Fever Ray, so it’s really all over the place.

What are the ideas behind your songs?

Depends on the song really. The EP we’re currently working on is more of a concept record, like what Pink Floyd or The Who did, so there’s a narrative that influences the lyrics and sounds.

Yet otherwise, interest and attraction: being attracted to an idea, a phrase, a sound, and then interested enough to explore it and see where it leads.

Has the lifestyle in China changed, compared to when you start to play music? Does this affect your way of creating music?

There have been some changes but none that have affected our music-making too much. Some live houses closing and rising rent prices/operating costs forcing live houses to ask for guarantees from bands. Yet we feel confident we can adapt: we are realistic that not everyone likes the odd art we make, so if we can’t pack out a live house we’d be just as happy to play in a small bar/tea house/ art gallery.

From your point of view, what are the main differences in playing music in China, compared to other countries?

Economics and attitude are the main things that spring to mind. Even in Beijing the basic costs of playing a show, running a tour, etc isn’t that high when you take into account that transportation is cheap, most venues have backlines, and food/accommodation isn’t expensive either.

Back in the UK, you need your own gear and it’s very expensive to travel/eat/sleep for examples. Yet in other places there is more of a DIY aesthetic, there are some of that in China but it can very cliquey in certain scenes. Another difference elsewhere, in Europe or South East Asia for example, is that after a show the audience is much more likely to stick around and have a conversation. It creates a nicer atmosphere after a show rather than just packing up gear and waiting for a taxi.

Most backstage stories consist of putting on makeup, walking around in circles, and worrying about what might go wrong. We’ll tell you a more interesting pre-show story from when we were touring Europe last year:

After a show at a really cool underground venue in France, we got talking to a guy who offered to drive us to the next show, a punk festival in Belgium. We were planning on taking the train, but it’s a pain to deal with trains when you have big suitcases and also our rail pass was only for ten journeys and we had to make eleven. This guy liked our music and wanted to go to Liege anyway, so it seemed like a good deal. We asked our friends who we’d played with and they said he was a good guy, just a little crazy (we should have picked up on that!). So the next day he meets us at the place we had stayed at and indeed had a car with enough space for all our gear.

He seemed very excited about wearing a Hawaiian shirt and flying a flag out of the trunk down the motorway, but whatever, all seemed fine. We get on the motorway and everything is fine, until we cross the border into Belgium, when straight away he cracks open a beer and starts drinking from it. Dann asked him what he was doing and he replied it’s normal in Belgium and not a problem (it is a big problem). Over the next few hours, he continued to drink as we drove, and not weak lagers either but strong Trappist beers. He’d even let go of the steering wheel to grab another beer or ask Dann to watch out for the traffic in front in case they might crash or there would be a police car.

We really should have got out, but we were on the motorway and didn’t know how to get to the venue anyway. So the whole two hours Dann was sat in front, jaw clenched, adamant this is how they’d die. Su meanwhile was asleep in the back the whole time. Obviously, we didn’t die, but we did learn a lesson about being careful who we let drive us. After that, this guy didn’t sleep for 48 hours and kept trying to steal people’s drinks whilst telling people he was our manager. You meet some interesting people on tour.

You play music and create also a theatrical show. Did you plan ahead for the show, or do you followed the flow?

Half and a half. For Guiguisuisui our performance is quite scripted in that the show is divided into three sections and though we sometimes change the songs in each section they fit a formula to build energy and then bring it down again.

So to allow for costumes changes we have transitions prepared of background loops, and for our characters, we have ideas of how they move and interact.

Yet at the same time, the way we interact with each other is most unscripted, we never sat down and wrote that out, and in a similar way how we interact with the audience is always unique because that depends on them. For example, a favorite part of the show for Dann is giving the skateboard guitar (The Diddly Board) over to an audience member to play. We never know what they will do or how long it will go on for, so we just roll with it.

The Triad in China and Hong Kong