If you have recently visited any newsmedia portal, you probably noticed at least a few articles about the trade war between China and the US.

There have been tensions on the economic and political basis between these two global powers for years, but they have grown a lot more severe in the past few months. Let us discuss the topic more in-depth and see whether it is indeed a trade war, what industries have been affected, and what are the significant implications of an economic battle between such countries like the US and China.

First of all, what is a trade war and how does it begin? No surprise that countries disagree with each other from time to time about the fairness of the economic trades – quotas, subsidies, tariffs, and similar policies. However, such disagreements do not always escalate to a full-blown trade war. If two countries decide to impose tariffs on each other as a one-off method to solve a disagreement or prove one’s truth, it is not a war yet. However, if this escalates into further and more severe tariffs or even economic sanctions without a foreseeable end, that is a trade war.

Thus, is China and the US involved in a trade war? According to the majority of the media, yes, it is a trade war. However, this disagreement seems to be changing each week – one article talks about the US putting a 25% tariff on more than 1000 Chinese exports and the Chinese responding with the same policies for over 100 American-made product exports. However, the next media coverage speaks of future cooperations between the power-players. Nevertheless, some of the actions taken have had visible effects, especially on the Chinese tech sector.

The first case is the ZTE (Zhongxin Telecommunication Equipment Corporation), one of the leading Chinese tech companies, which was one the first significant victims of the trade war, as the US government decided to exclude this firm from its economy entirely. In April, the administration banned the sales of US-made phone parts to ZTE. Such a decision brought the company close to bankruptcy, as they mostly (up to 80%) depend on the American suppliers. However, just recently Donald Trump changed his mind and now appears to have lifted the sanctions and wishes to help ZTE get back to business, as they would have faced not only bankruptcy but also lay off of tens of thousands of their employees.

Another example is the tension between Huawei and the US, which has been discussed previously already. The US government and intelligence agencies got concerned about the security of the Chinese technology. They were wary of possible tracking and monitoring of the American citizens. Such worries led to the US Department of Defense halting the sales of Huawei (and ZTE as well) phones and modems to the military bases. Furthermore, Huawei was also negatively affected back in January, when AT&T, due to the pressure from the American authorities, canceled a planned deal with Huawei.

While the US is aiming at China’s high-tech companies, Beijing also has a range of options that might hit the US economy back. For instance, if China interfered in the manufacturing of Apple products and their parts, for example, by delaying shipments, slowing down the production, or switching to more expensive parts; that may negatively impact Apple’s market share globally.

Even though the governments are focusing on tariffs and restrictions towards each other, this trade war between Beijing and Washington D.C, if escalated, might be a lot more influential on the overall global economy. China and the US are not two isolated poles; they are a part of the world trade, which means that other countries and industries may suffer as well.

The direct tariffs towards Beijing might indirectly hit nations, which are integrated into the production of goods coming from either super-powers, a.k.a., virtually every country in the world. For example, Japan and South Korea that export integrated circuits to China for the further high-tech manufacturing; some European companies, which depend on both the US and China for production; or international suppliers that are based in the US but sell most of their goods to China (such as Boeing). All of them would see production and sales drastically slow down.

The world is interlinked, and no place is an isolated autocracy. China depends on the American technology, operating systems, and other goods. The US needs China for the low-price imports and cheaper production costs. The rest of the world is involved in the production and consumption of all these goods. A war between any two countries at this time and day is immediately global. 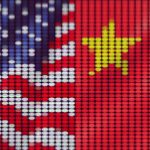 China’s 5G market to exceed one trillion yuan by 2026