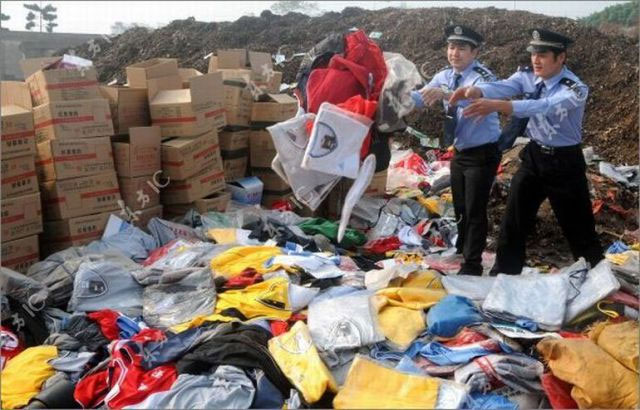 You may find the report here.

According to many Chinese news outlet like Xinhua or People.cn, there’s “no scientific or authoritative method for keeping statistics on counterfeit goods, and a regional organization’s data on another country or even the world is not reliable”.

According to the 74-page report, 86% of the world’s counterfeit goods in 2015 came from Chinese mainland and Hong Kong, adding that intellectual property theft was one of the most lucrative criminal enterprises.

Following an excerpt from the report:

China remains the key country of provenance for counterfeit goods, and Hong Kong acts as a transit point for goods originally manufactured in China, but other countries also have specific trading characteristics. For instance, Turkey has been linked with Bulgaria and Belgium through trade in counterfeit labels, tags and stickers, which facilitates internal manufacture.

Counterfeit sportswear and fashion labels have also been reported in relatively high volumes.

This is of particular significance, as EU-based counterfeit clothing and footwear manufacturers, potentially criminal groups, may be importing labels and tags to append to unbranded clothing in order to manufacture and distribute counterfeits within the EU.

Evidence of such domestic manufacturing was found in Italy, where most of the counterfeit manufacturing and sales in Catania were by non-Europeans. Chinese gangs made the shoes on the Italian mainland or smuggled them in from Asia through the port of Naples. Brand logos were often not added until they reached the point of sale, to avoid scrutiny from authorities.

However, most seizures of packaging materials were of items associated with tobacco products (74 % of units recovered).

The majority of this packaging was stopped at the United Kingdom, the Netherlands or French borders and was recorded as having originated predominantly from China and Hong Kong. Large numbers of branded counterfeit tobacco pouches are manufactured in China and Hong Kong, but possibly not the counterfeit tobacco itself. This could be shipped separately as an unbranded product, manifested as a non-IPR-infringing import, and therefore not be liable to seizure.

China has long been recognised as the engine of the global counterfeiting industry. Counterfeit goods are estimated to amount to approximately 12.5 % of China’s total exports and over 1.5 % of its GDP. This results in estimations that 72 % of counterfeit goods currently in circulation in three of the world’s largest markets for such products, namely the EU, Japan and the USA, have been exported from China.

Altogether, 49 % of all IPR-infringing seizures made in the United States in 2015 emanated
directly from China. Simultaneously, Japan reported 91 % of all cases being of Chinese
provenance. EU statistics show Chinese exports as amounting to 56 % of all recoveries by caseload. In combination, Chinese counterfeit exports recovered in the EU, Japan and the
United States were valued at EUR 1 083 823 626 in 2015 alone, contributing significantly to
the estimation that up to 2.5 % of all global trade and up to 5 % of EU imports concern IPRinfringing products. The long-distance cargo train connections between China and the EU may also offer a new advantageous route for transportation of counterfeits.

China is not just responsible for direct exports however, and a number of transit countries are also known to contribute significant numbers of Chinese-made counterfeits to the overall picture.

Seizures from Hong Kong contributed only 4.2 % to the Japanese caseload in 2015, but a much larger 34 % to US figures and 26 % to those of the EU, indicating that the territory plays a major role in handling illegal exports destined for locations outside of Asia. Hong Kong is not a leading counterfeit manufacturing hub in its own right however, and many of the IPR-infringing goods seized internationally of Hong Kong provenance are believed to have originally been manufactured in China. One of Hong Kong’s main communications assets is the port of Hong Kong, which has been recorded as the world’s busiest container port and the largest serving southern China. EU border seizure statistics for 2015 show that 21 % of all units recovered of Hong Kong provenance at the external borders arrived by maritime transport, indicating that the port may to some extent be used to facilitate the bulk export of Chinese counterfeits from Asia to Europe by sea.

A second element in Hong Kong’s status as a global logistics centre is its airport, which was the world’s busiest for air cargo throughput, handling 4.38 million tonnes. In all, 66.3 % of inward traffic emanated from Asian territories and 15.4 % of outward movements were destined for Europe, suggesting that a degree of this statistic corresponded to Chinese exports transiting Hong Kong airport and in the process, acquiring Hong Kong provenance.

The country’s air communications continue to play a significant role in the illegal supply chain for IPR-infringing goods destined for the EU. Altogether, 33 % of units recovered at the EU external borders in 2015 of Hong Kong provenance arrived by air freight. Generally, express courier traffic, international post and air freight in combination constitute the most commonly used transport methods. The seized consignment arriving in the EU from Hong Kong consisted of 10 items or less. This is strongly indicative of internet trade and may be the result of Hong Kong based entities fulfilling low-volume electronic orders made in Europe, either as a subsidiary of large-scale Chinese counterfeit manufacturers or independently, based on bulk imports from mainland China.

Finally, Hong Kong shadow companies are increasingly being used to engage in counterfeiting and other infringing activities in China. These companies do not generally conduct business in Hong Kong, but carry out counterfeiting and other illegal activities in mainland China under the Hong Kong company name, with the intention of misleading consumers and avoiding legal liabilities in mainland China. A new trend has been identified in China, whereby online vendors increasingly use shadow companies to set up e-shops, thereby misleading consumers as to their whereabouts. Counterfeit goods manufactured and sold by such companies in China are deliberately shipped through Hong Kong, in order to maintain the pretence of their having originated in the territory.

Overall in 2015, China and Hong Kong together were the provenance of 86 % of global
counterfeiting and USD 396.5 billion worth of counterfeit goods and in combination, they form the largest ongoing threat to global IPR integrity.