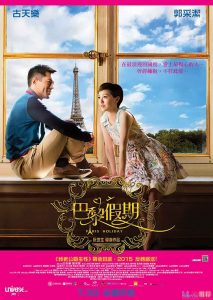 Two strangers, both heartbroken, share an apartment in Paris.

Two strangers, both heartbroken, share an apartment in Paris.

Paris Holiday (Chinese: 巴黎假期) is a 2015 romantic comedy film directed by James Yuen. A China-Hong Kong co-production, the film was released in Hong Kong on July 23 and in China on July 31, 2015.

The film earned CN¥17.912 million at the Chinese box office.