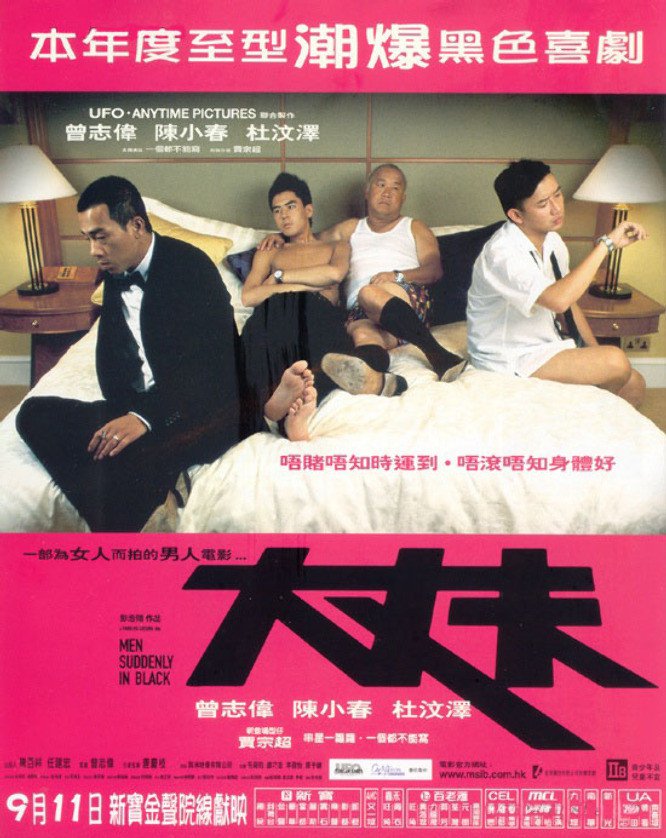 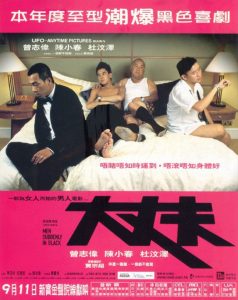 Having turned a hitman movie into a black comedy delight in You Shoot, I Shoot, director Pang Ho-cheung continues genre-bending in Men Suddenly in Black – a clever crossover of crime and gangster elements with a plot centred on cheating men.

With all their partners out of town for just 14 hours, four men set out on a mission to cheat on their women. Working to almost military precision, the men arm themselves with untraceable mobile phone numbers, cash to take place of credit cards and plenty prophylactics as they seek out new haunts and new conquests. The reason for their task is more than just playing around, however, but part of a determination to build on the heroic legacy of Ninth Uncle – a man who five years earlier was caught by his wife in a nightclub and to this day has not squealed on mates who successfully fled the scene. But unknown to the men, the women hop off their plane to Thailand just before take-off, sensing bad omens that their men are sneaking around behind their backs.

They quickly get on the trail, putting a spanner in the works for the men’s ambitious plans. Based loosely on Chor Yuen’s Wise Wives and Foolish Husbands (1969) and occasionally casting a nostalgic eye over excesses in Hong Kong over recent years, Men Suddenly in Black succeeds in injecting new life to each genre it works in. Action sequences get a new twist with one seeing Jordan Chan battle journalists armed with camera flashes, and police investigation material is co-opted into scenes with the women chasing up their men. Fans of Hong Kong’s cops and gangsters films should meanwhile enjoy seeing how old genre conventions get reworked in new directions. Actors Eric Tsang, Jordan Chan, Chapman To and Spirit Blue make for a diverse bunch of leads, crossing the boundaries of comedy and drama in the script and even getting a heroic theme song to accompany them. Teresa Mo, Candy Lo, Marsha Yuan and Tiffany Lee offer an intriguing mix of characters in the chase, each providing with different takes on the course of events.