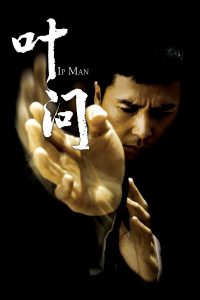 The life of Yip Man, the kung fu master celebrated for spreading the wing chun school of martial arts, gets the silver-screen treatment in Ip Man. Yip, who died in 1972, is best known for his post-war teaching in Hong Kong, where his most notable wing chun student was a teenage Bruce Lee in the ‘50s. But such illustrious company isn’t the focus of this movie’s story, which instead starts in 1935, spans the Japanese occupation of Yip’s southern Chinese hometown Foshan, and ends before he flees the mainland for Hong Kong in 1949.

We’re introduced to Yip Man (Donnie Yen) while he’s a well-off and celebrated martial-arts master in pre-war Foshan, and his skills are first on display in a friendly bout against a local challenger. Another stronger fight against a rough-and-tumble adversary from up North (Louis Fan) makes it clear that Yip is the town’s man to beat and, come Japan’s invasion of China, the occupying forces catch on as well. Reduced to shoveling coal during the war to make ends meet after his mansion is confiscated, Yip is eventually spotted by General Miura (Ikeuchi Hiroyuki) and asked to teach his skills to the Japanese.

Yip’s firm refusal to Miura is the peak of the strident patriotism on display in Ip Man, making the film the latest in a long line of martial arts pictures of Chinese heroes standing up against foreign aggressors. The filmmakers are keen to weave in diverting threads as well, however, especially early on as Yip balances kung fu with sedate family life, and in his teaching of wing chun to bullied staff at a cotton mill. Where Ip Man stands on more shaky ground is as a reliable biopic, with aspects left unclear when historical detail is glossed over or ignored. Why, for instance, is the factory run by Yip’s mate Zhou (Simon Yam) able to stay in business through the occupation while desperate countrymen resort to hard labor or worse?

Taken as high-profile martial arts entertainment and a loose introduction to its principal historical character, however, Ip Man is one of the more impressive Hong Kong action films of recent years. Key to the movie’s success is Donnie Yen’s toned-down performance, nicely reserved and thus more accessible after the star’s other films with helmer Wilson Yip in recent years. The wing chun moves are direct and never showy, and this makes for an intriguing counterpoint as the hero takes on fierce Northerners and Japanese foes. The tournament template that has made it into many a kung fu film sneaks in with showdowns at the local Japanese headquarters and on a public stage, and the action choreography, lensing and editing present the bouts both legibly and forcefully. Audiences in Hong Kong and China responded well to the onscreen heroics when Ip Man hit cinemas in December 2008, and it’s no surprise, then, that the movie’s backers have already fast-tracked sequels to follow up on Yip’s days in Hong Kong.

Ip Man is a 2008 Hong Kong biographical martial arts film based on the life of Yip Man, a grandmaster of the martial art Wing Chun and teacher of Bruce Lee. The film focuses on events in Ip’s life that supposedly took place in the city of Foshan during the Sino-Japanese War. The film was directed by Wilson Yip, and stars Donnie Yen as Ip Man, with martial arts choreography by Sammo Hung. The supporting cast includes Simon Yam, Lynn Hung, Lam Ka-tung, Xing Yu and Hiroyuki Ikeuchi.

The idea of an Ip Man biopic originated in 1998 when Jeffrey Lau and Corey Yuen discussed the idea of making a film based on Bruce Lee’s martial arts teacher. However, the studio producing that proposed film closed, and the project was abandoned. Producer Raymond Wong decided to develop his own Ip Man film with full consent from Ip’s sons, and had filmmakers head to Foshan to research Ip’s life. Ip Chun, Ip Man’s eldest son, along with martial arts master Leo Au-yeung and several other Wing Chun practitioners served as technical consultants for the film. Principal photography for Ip Man began in March 2008 and ended in August; filming took place in Shanghai, which was used to architecturally recreate Foshan during the late 1930s and World War II.

During filming, conflicts arose between the producers of Ip Man and filmmaker Wong Kar-wai over the film’s working title. Wong, who had been developing his own Ip Man biopic, clashed with the producers after learning that their film would be titled Grandmaster Ip Man (Chinese: 一代宗師葉問), which was too similar to the title of the other film. The producers of Ip Man agreed to change the film title, despite Wong’s film being in development hell. Kar-wai’s film, titled The Grandmaster, was released on 10 January 2013.

Ip Man is the first film in the Ip Man film series. It premiered in Beijing on 10 December 2008, and was released theatrically in Hong Kong on 19 December 2008, receiving widespread acclaim from critics and audiences. Before the film’s release, Raymond Wong announced that there would be a sequel; a second installment titled Ip Man 2, was released in April 2010, and a third installment titled Ip Man 3 was released in 2015. Ip Man grossed over US$21 million worldwide, despite not being released in North America and most of Europe. Following its success, the film was nominated for 12 Hong Kong Film Awards, winning awards for Best Film and Best Action Choreography.