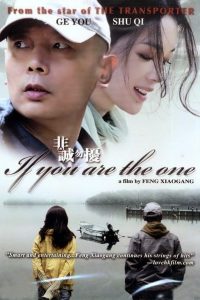 Qin Fen, a funny, honest, single inventor, met a girl called Smiley, who was in agony of her boyfriend's betrayal. They traveled to Hokkaido, tried to help Smiley cure her pain in heart, and both of them gradually found their true love and life redemption during the journey.

Qin Fen, a funny, honest, single inventor, met a girl called Smiley, who was in agony of her boyfriend's betrayal. They traveled to Hokkaido, tried to help Smiley cure her pain in heart, and both of them gradually found their true love and life redemption during the journey.

Qin Fen, a funny, honest, single inventor, met a girl called Smiley, who was in agony of her boyfriend’s betrayal.

They traveled to Hokkaido, tried to help Smiley cure her pain in heart, and both of them gradually found their true love and life redemption during the journey.

China’s great hit-maker and FEFF favourite Feng Xiaogang gives his latest blockbuster If You Are The One a surprising new spin. Udine audiences have enjoyed his films since the beginning of FEFF, comedies like Cell Phone and World Without Thieves. If You Are The One is a romantic comedy, a commercial world spoof, and a social satire, all the genres this master of pop movie making is famous for. But his newest film, a huge hit during China’s biggest movie season at the end of last year, is something more, something unexpected. Hilariously sharp dialogue and penetrating social commentary are here integrated with something deeper; a romantically tragic air, a poignant sadness of tone that takes Feng’s cinema to places it’s never been before.

The film’s star, Ge You, is probably the most popular movie star in mainland China. He has appeared in all of Feng Xiaogang’s comedies: he gives their wordplay the characteristically spicy, mordant, deadpan performance that defines humour for Beijing audiences. Here he plays Qin Fen, an inventor who strikes it rich when his latest device, the CRT2008 (Conflict Resolution Terminal), blows away venture capitalist Fan Wei (China’s second most popular comedian, here in a deliciously understated role). The device, in fact, is a simple plastic tube, into which parties in conflict can insert their hands, in a game of “rock paper scissors”. It’s a typically ridiculous Feng Xiaogang conceit, but one that launches the film into its central romantic comedy and nods, warily, at the same time, at the current Chinese Communist Party’s campaign for hexie, i.e. harmonious resolution of disputes.

Qin Fen, now a rich man, embarks on a search for an ideal wife: the film’s Chinese title, feicheng wurao or “serious replies only”, refers to the last line of an unusual marriage wanted ad that Qin Fen composes, specifying that his ideal mate should be not too successful, not too beautiful, but able to fold sheets to his exact specifications. Several dating mishaps include a surprisingly daring scene (for China) with Qin’s old male buddy (brilliant theatre actor Feng Yuanzheng) who admits an attraction for Qin that Qin has a hard time dealing with. But when Qin meets Xiaoxiao, played by Taiwanese star Shu Qi, he’s blown away by her supernatural beauty. Although they quickly decide that their rapport is more best buddies than lovers and potential mates.

As Qin Fen continues his futile romantic quest, he continually returns to Xiaoxiao, and Shu Qi has the acting chops (not to mention the looks) for the part. The film’s daring move is to focus on her, especially her revelation that she’s irreconcilably, tragically sorrowful, the victim of an irresolvable love affair with a married man (Alex Fong). Shu Qi here shows depths of feeling: she’s a serious, gifted actress when the role is right. Tragic love and romantic love battle it out, but Feng Xiaogang knows how to keep both genres eerily well in balance: rather than conflicting, they mutually support and deepen each other. Qin Fen’s verbal dexterity and surprising emotional maturity are just the support Xiaoxiao needs, and their growing friendship leads through intimacy to something unexpectedly touching.

Feng takes advantage of scenic locations (the action shifts from Beijing to Hokkaido), not to mention a bevy of high profile product placements (it’s Chinese shamelessly commercial cinema, after all) to move the film in entirely unexpected directions. We can see how he uses his recent experiments with period tragedy (The Banquet) and dramatic war epic (The Assembly) to enrich his comedic gifts, giving this work a new richness and expansive ambition. Funny, moving, surprising, and thoroughly satisfying.


If you like this article, please help us by making a donation so that we can continue our work. Please help keep us independent.

All combined China Underground Movie Database has a total of 1993 movies in the library, regrouped in 1128 collections, 31 genres and 6639 actors.