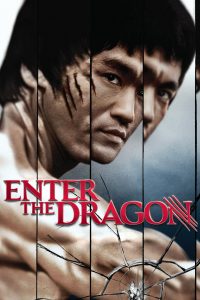 Enter the Dragon is a 1973 Hong Kong-American martial arts film directed by Robert Clouse, starring Bruce Lee, John Saxon and Jim Kelly. This was Bruce Lee’s final film appearance before his death on 20 July 1973 at age 32. The film was first released on 26 July 1973 in Hong Kong, six days after Lee’s death.
Often considered one of the greatest martial arts films of all time, in 2004, the film was selected for preservation in the United States National Film Registry by the Library of Congress as being “culturally, historically, or aesthetically significant”. The film was often thought of as the one that sparked the “Kung Fu Kraze” both in the United States as well as beyond.

Lee (Bruce Lee), a highly skilled Shaolin martial artist from Hong Kong is approached by Braithwaite, a British intelligence agent investigating suspected crime lord Han (Shih Kien). Lee is persuaded to attend a high-profile martial arts competition on Han’s private island in order to gather evidence that will prove his involvement in drug trafficking and prostitution. Shortly before his departure, Lee also learns that his sister’s killer, O’Hara (Robert Wall), is working as Han’s bodyguard on the island. Also fighting in the competition are indebted gambling addict Roper (John Saxon) and fellow Vietnam war veteran Williams (Jim Kelly).
At the end of the first day, Lee is able to make contact with undercover operative Mei Ling (Betty Chung) and after meeting with her, sneaks deeper into Han’s compound looking for evidence. Soon after, he is discovered by several guards and is forced to defend himself before escaping. The next morning, Han has the guards publicly killed by chief guard Bolo (Bolo Yeung) for failing him. After the execution, Lee faces O’Hara in the competition and after an emotional battle ends up killing him. With the day’s fighting over, Han confronts Williams about the identity of the intruder and proceeds to beat him to death when he fails to answer. Later, Han reveals the scale of his drug operation to Roper in the hope that he will join his organization. Despite being initially convinced, Roper refuses after learning the fate of Williams.
Lee sneaks out again that night and manages to send a message to Braithwaite, but is finally captured after a protracted battle with the guards. The next morning Han arranges for Roper to fight Lee, but Roper refuses. As punishment, he is forced to fight Bolo instead but manages to overpower and kill him after a grueling encounter. Enraged by the unexpected victory, Han commands his remaining men to kill Lee and Roper. Facing insurmountable odds, they are soon aided by the island’s prisoners, who have been now been freed by Mei Ling. Lee finally confronts Han in a hidden mirror room and eventually kills him after breaking all the room’s mirrors to reveal his location. Lee returns to the battle which is now over, a bruised and bloodied Roper sits victorious while the military finally arrive to take control of the island. [Wikipedia]