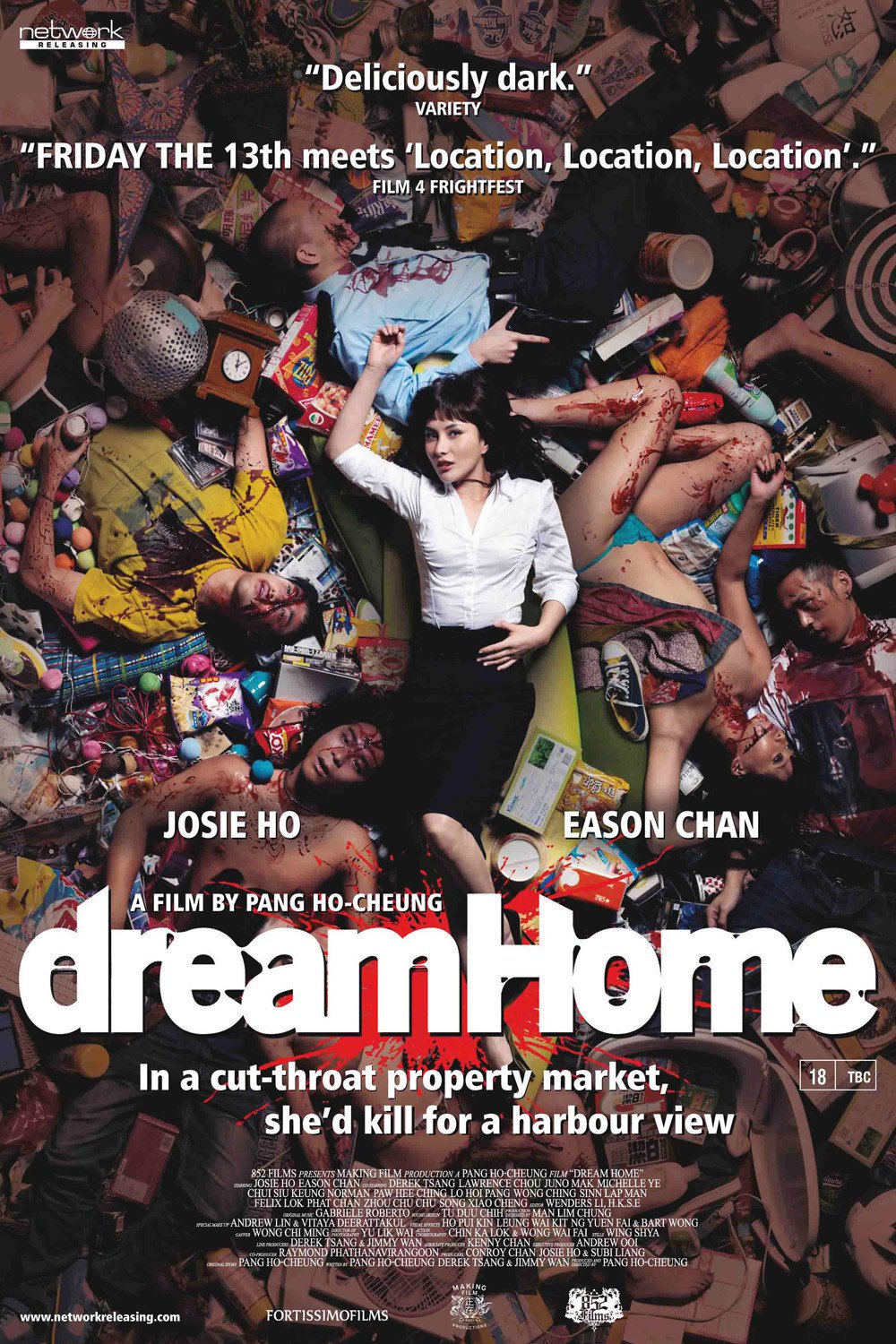 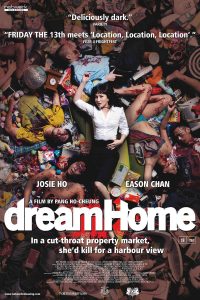 A woman will go to whatever lengths necessary to obtain her dream home with a view of the sea. This includes driving down the property value and decreasing the occupancy rate by killing her potential neighbors ...

A woman will go to whatever lengths necessary to obtain her dream home with a view of the sea. This includes driving down the property value and decreasing the occupancy rate by killing her potential neighbors ...

The film is the story of Cheng Lai-sheung (Josie Ho) who saves up money to buy her dream home. After the sellers decide to turn her down, she goes into a murderous frenzy.

Dream Home was originally meant to be released in October 2009 in Hong Kong but due to legal disputes between 852 Films and the director the film premiered in Italy on 23 April 2010 and in Hong Kong on 13 May. The film received mixed reviews which focused on whether or not the satirical and horrific scenes worked well together.

Shockingly violent and rooted in social issues, Pang Ho-cheung’s hot-topic slasher lunges for the jugular in an attack on the city’s overinflated property-development scene and public ills surrounding it. The grisly mood is established pre-credits as a young woman slips into a classy housing block, garrotes security a guard amid sprays of blood, kills the CCTV system and heads upstairs.

Meet Cheng Lai-sheung (Josie Ho), a local girl who grew up across the road from where the towers of No. 1 Victoria Bay now stand. In 1990s flashbacks we see the district’s community being torn apart when hired thugs force out neighbours ahead of redevelopment projects, and viewers watch on as Cheng’s dad suffers from construction-related illness and grandpa laments the end of nearby waterfront for land reclamation. Yet even with all this in her past, personal reasons mean Cheng is now dead set on buying an pricey harbour-view home in the modern estate, and she’ll do anything she can to snag the property of her dreams.
Intercut with Cheng’s backstory is a procession of gory confrontations, unfolding mostly unexplained as she works her way through different apartments. Sure to be the main talking point on Dream Home’s coming cinema release, the killings are brutal and disturbing in their range of victims. Cheng is seen cutting down residents and visitors indiscriminately, and uses the most ghastly means to get the job done. When an eyeball is poked out, say, it’s done by screwdriver from the back of the head. And scenes of slaughter in a playboy pad manage to connect dark comedy with an array of gruesome endings.

It’s radical cinema, and as Pang and co-writers Derek Tsang and Jimmy Wan make clear, it’s one based on social malaise and political concerns – something all too rare in today’s Hong Kong film scene. Dream Home’s terror is set largely against late 2007’s skyrocketing property prices, as would-be home owners struggle to buy small, increasingly expensive flats while their salaries are stuck somewhere around pre-financial crisis levels. (In early 2010, things are much the same.) The picture speaks to a sense of helplessness in the face of real estate cartels, widely perceived government-developer collusion and demolitions of culturally significant city sights. Urban-planning issues more than ever are triggering protests, and that too is represented as Cheng and her dad watch 2007 news reports on TV. It’s not the first time Pang has followed social concerns on-screen (his 2001 feature debut even opens with a man suicidal over property woes), and other hallmarks of his filmography lurk in Dream Home too, whether in black humour or authentic small talk or looking back on recent history’s changes.

Dream Home is also a meticulously crafted picture. Three different apartments, the corridors and the guard station were painstakingly built in studio sets (surely no landlord would have wanted this shot in their premises). Yu Lik-wai, the longtime DP for Jia Zhangke, provides discreet roving camerawork and the score and soundscapes by Italian Gabriele Roberto (Exodus, Memories Of Matsuko) are far above the Hong Kong cinema norm. Action directors Chin Kar-lok and Wong Wai-fai, usually at work on spectaculars like Fire Of Conscience, meanwhile apply their skills to more intimate surrounds. Actress-producer Josie Ho tackles her arduous central performance with clear determination as she sets about her hideous acts, and rounding out the cast are respected veteran character actors alongside regulars from the Pang Ho-cheung film universe. Dream Home may well inhabit the slasher genre, but this cinema shocker aims to exceed mere B-grade thrills.

In Hong Kong, Cheng Lai-sheung (Josie Ho) works two jobs with the hope of earning enough money to buy her own apartment with a view of the Victoria Harbour. In mixed chronological order, we see scenes from Lai-sheung’s past. In her childhood, her family and friends are evicted from their low-rent housing so that developers can build expensive flats. Later in life, she vows to buy her mother and father a new apartment, but is unable to fulfill her promise before her mother dies. When her father becomes ill, she begins searching in earnest for a new place, having an obsession for the Victoria Bay No. 1 high-rise address from a childhood vow that she would one day buy a flat near the harbour so that her uncle would not have to walk there and back on a daily basis and not needing to search for him every evening.

The bank will only give her a 70% mortgage and payments would reach over $15,000. Unfortunately, because of an oversight in declaring her father’s medical history, she no longer has insurance to pay for his expensive treatment and has to take a second job. After Lai-sheung does save enough for a down-payment, her father’s medical bills become excessive. When she asks her married lover for a loan to cover these, he refuses. One night her father has trouble breathing and, instead of giving him his oxygen, Lai-sheung allows him to die. The insurance payment now adds enough money to her current savings to purchase her dream flat.

On her way to finalize the purchase, there is a hike in the stock market that makes the owners decide to raise the price. This sends Lai-sheung into a frenzy where she goes to the flats and attacks people who live and work there, killing them with low-tech, household items. During the course of the final killings, the police arrive at the flat, demanding entry. A struggle ensues during which both officers are killed.

Returning to her day job, Lai-sheung receives a call from her agent saying the owners of the flat she wishes to buy are willing to sell after all. Lai-sheung suggests that they might want to sell for a lower price, since there were 11 murders in the building the previous evening. That night, Lai-sheung’s lover comes round to pick her up, but she turns her back on him and walks away, ending their relationship. The film concludes with Lai-sheung staring out at the harbour as newscasts discuss how America’s worsening subprime mortgage crisis is beginning to have global repercussions. [wikipedia]