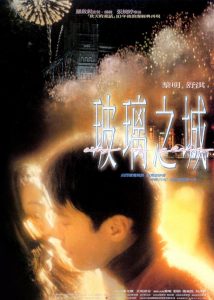 The story of man and ex-girlfriend found dead after a car crash and how their children come together to retell the story.

The story of man and ex-girlfriend found dead after a car crash and how their children come together to retell the story.

Lushly shot, and with two of Hong Kong’s top stars in the leads, City of Glass is a romantic drama spanning three decades that’s like relaxing in a warm bath.

Mabel Cheung’s fifth film has something of the remembered quality of her earlier An Autumn’s Tale(1987), though in this case the setting is Hong Kong rather than New York, and its complex telling, with copious flashbacks, sometimes evokes the spirit of Stanley Donen’s Two for the Road. In London, on New Year’s Eve 1997, lovers Raphael (Leon Lai) and Vivian (Shu Qi) crash their car. The accident is seen on TV by Raphael’s son, David (Daniel Wu), who takes his father’s ashes back to Hong Kong, where he bumps into Vivian’s daughter, Susie (Nicola Cheung), there with her mother’s ashes. Brought together by circumstances, the two very different youngsters gradually become friends as they (and the audience, through flashbacks) learn more about their individual parents’ long, secret love affair, from college in the early ’70s to the present. The film is as much about Hong Kong as the two lovers, with small details marking the passage of time. It also has a feel that is new to the directors’ work – a Lelouchian interest in how chance marks people’s lives and how human behaviour repeats itself across the generations.