Sino-Indian war images. The Sino-Indian war (中印边境战争) was a military conflict fought between China and India in 1962 over control of the Himalayan border.

Since the Tibetan uprising of 1959, when India guaranteed diplomatic asylum to the Dalai Lama, a series of violent clashes followed along the border between the two countries.

By 1960, India had begun a defensive policy to hinder Chinese military patrols and outposts in that northwestern portion of the Aksai Chin Indian territory, delimited by the McMahon Line in 1904, the borderline contested by the Chinese government.

During the 1960s and 1960s, Chinese military action became increasingly aggressive, after the Indian refusal of the proposed Chinese settlements. China began patrolling the disputed region again on April 30, 1962.

On October 20, 1962, China invaded the disputed territories along the 3225 km border in the Ladakh region, crossing the McMahon line.

Chinese troops advanced into Indian territory in both major conflict theaters, capturing Rezang La in Chushul and Tawang on the eastern side.

The war ended when China declared a ceasefire on November 20, 1962, announcing the withdrawal of its troops beyond the so-called “Line of Actual Control”.

Most of the clashes took place in the Himalayan mountainous regions, often at over 4000 meters above sea level.

The United States and Great Britain refused to sell advanced weapons to India, which instead received robust military support from the Soviet side, while the diplomatic conflict between China and the Soviet Union intensified.

This circumstance brought India into the Soviet orbit.

Related articles: The Sino – Vietnam War; The war of Korea; The Brutality of the Vietnam War depicted by Thomas Bill Hardt, Graphic Content 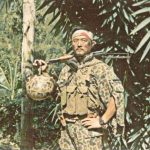