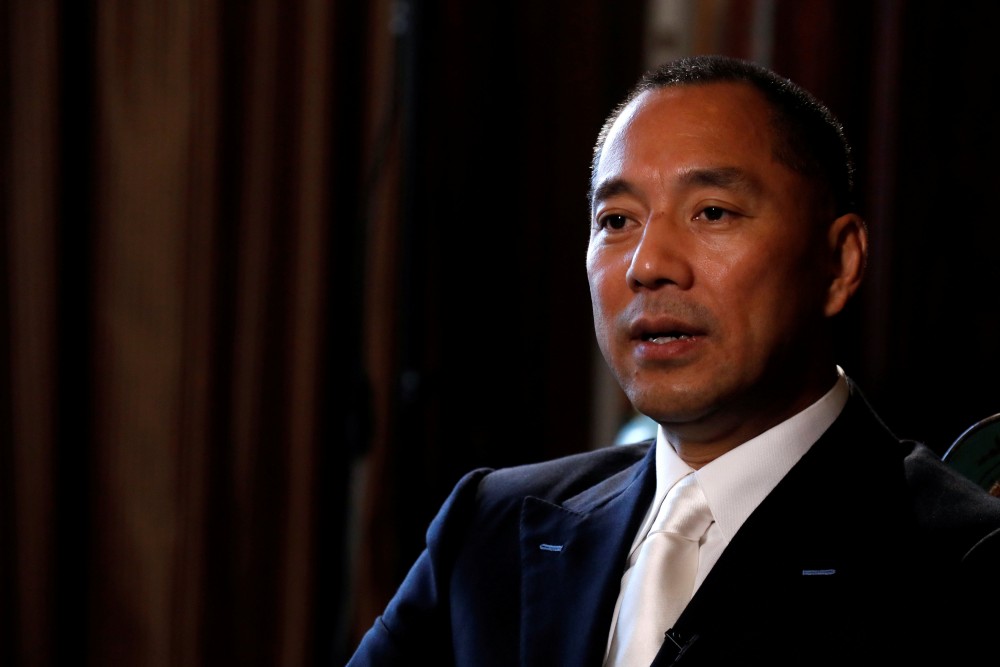 Appearing in the Dalian Xigang People’s Court on Friday, the three staff from Guo’s Beijing Pangu Investment confessed in a four-hour trial to obtaining 3.2 billion yuan (368.7 million pounds) from the Agricultural Bank of China in 2010 by using falsified company contracts, official seals and receipts. The loan was repaid in full in 2014. Two of the defendants also admitted to the false purchase of foreign currency.

In an online video posted on Friday, Guo said the facts were “completely different” to the charges, while suggesting any wrongdoing may have been due to his ambitious employees chasing higher pay and bonuses.

“(They) want the loan to go through, want to impress their boss,” he said, adding that China’s banking regulations sometimes forced people to do things that they wouldn’t otherwise do.

Guo has emerged in recent months as a political threat to the Chinese government in an acutely sensitive year, after unleashing a deluge of corruption allegations against high-level Communist Party officials through Twitter posts and video blogs. The businessman has made it clear that he wants to disrupt a key five-yearly congress to be held this autumn.

Guo, who resides in a sprawling $68 million apartment overlooking New York’s Central Park, has provided scant evidence to back up his claims. But his standing as a former billionaire insider, and his close ties with one of China’s most senior intelligence officials, the disgraced former state security vice-minister Ma Jian, have tantalised a large online following and made him a centre of attention in Beijing political circles.

While Guo was not named as a defendant in Friday’s trial, he featured prominently in the prosecution’s line of questioning, with the three employees repeatedly asked to confirm that Guo was the ultimate controller of Pangu and made all major business decisions, including to go ahead with the alleged loan fraud.

The Chinese government has been engaged in a sustained effort to discredit and tighten pressure on Guo.

In a highly unusual move showing the Chinese government’s determination in countering Guo’s damaging allegations online, foreign media were granted access to watch a live feed of proceedings from a media room established in the courthouse. Often foreign media are barred from getting access to such events.

Transcripts and footage of proceedings were also posted on the court’s official Weibo account, an increasingly common practice used for politically sensitive cases where the government and party-controlled judiciary wants to get its narrative out.

The trial on Friday is the first criminal case brought against his company since Beijing requested Interpol issue a global ‘red notice’ in April for Guo’s arrest.

One of Guo’s chief demands has been that his employees, who have been held indefinitely since they were first detained in early 2015, be freed or at least have a trial in accordance with Chinese law.

“As long as they given back their freedom, they can say they committed murder and arson that’s fine, as long as they go home,” Guo told Reuters on Friday in a conversation through a messaging service, adding that new “leaders” handling the case had expedited the hearing.

“It’s practical, this long-term detention is too unfair to them.”

The court prosecution summary said Guo would be dealt with “in another case”.

“Finances at the time were tight and we needed funds so Guo Wengui already contacted the bank, we were just instructed to prepare documents,” Pangu’s former finance director Yang Yin told the court. “All the decisions are made by him.”

In closing statements, the defendants expressed regret, pleaded tearfully for leniency, and spoke of the impact their lengthy detention had on their families.

The court said a verdict would be handed down at an unspecified later date.

The head of Agricultural Bank of China at the time of the loans, Xiang Junbo, who went on to head China’s insurance regulator, was investigated for corruption in April.

Guo has previously suggested that he has been engaged in negotiations with unnamed Chinese officials, and has pointed to the fact his wife and daughter were allowed to visit him in New York as an outcome of those talks.

The legal backlash in the case has not just been felt in China. Other high-profile figures caught in the crossfire of Guo’s online allegations have filed defamation suits against him in New York, including the Chairman of property developer SOHO China, Pan Shiyi, and prominent journalist and founder of Caixin Media, Hu Shuli.

Australian designer Yuge Bromley also told Reuters she is considering suing Guo, after he said she was an illegitimate child of a senior Communist Party official.