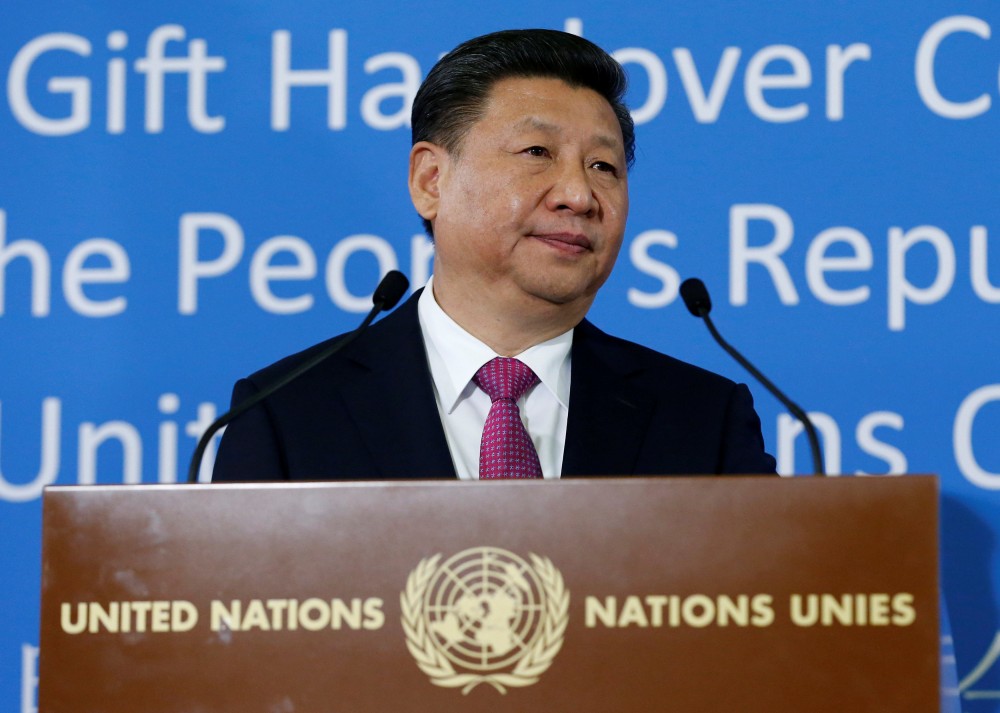 Just days ahead of Trump taking office, a self-assured Xi was in Switzerland as the keynote speaker at the World Economic Forum in Davos, offering a vigorous defence of globalisation and signalling Beijing’s desire to play a bigger role on the world stage.

Even on the thorny issue of the South China Sea, Beijing did not rise to the bait of White House remarks this week about “defending international territories” in the disputed waterway. Instead, China stressed its desire for peace and issued a restrained call for Washington to watch what it says.

“You have your ‘America first’, we have our ‘community of common destiny for mankind’,” Retired Major-General Luo Yuan, a widely read Chinese military figure best known for his normally hawkish tone, wrote on his blog this week.

“You have a ‘closed country’, we have ‘one belt, one road’,” he added, referring to China’s multi-billion dollar new Silk Road trade and investment programme.

And while China has repeatedly said it does not want the traditional U.S. role of world leadership, a senior Chinese diplomat accepted this week it could be forced upon China.

“If anyone were to say China is playing a leadership role in the world I would say it’s not China rushing to the front but rather the front runners have stepped back leaving the place to China,” said Zhang Jun, director general of the Chinese Foreign Ministry’s international economics department.

That message was reinforced this week when Trump formally withdrew the United States from the Trans-Pacific Partnership trade deal, distancing America from its Asian allies. Several remaining TPP members said they would now look to include China in a revised pact, or pursue Beijing’s alternative free trade agreements.

“At many important multilateral forums, China’s leader has put forward Chinese proposals, adding positive impetus to world development,” Su Xiaohui a senior researcher at the Foreign Ministry-backed China Institute of International Studies, wrote  of the U.S. TPP decision in the overseas edition of the People’s Daily.

“In the economic integration process of the Asia Pacific, compared to certain countries who constantly bear in mind their leadership role, what China pays even more attention to is ‘responsibility’ and ‘stepping up’,” Su said.

China’s hosting of an international conference on its “One Belt, One Road” initiative in May is one opportunity for Beijing to showcase its leadership of global infrastructure and investment.

A diplomatic source familiar with preparations said China was likely to hold it at the same glitzy convention centre used to host the Asia Pacific Economic Cooperation summit in 2014, setting the stage for Xi’s most high profile diplomatic event of the year.

“China’s pretty much inviting everyone,” the diplomat said.

Another area where China is keen to be seen as leading the way is climate change. Trump has in the past dismissed climate change as a “hoax” and vowed during his presidential campaign to pull the United States out of the Paris Climate Agreement.

Li Junhua, head of the Chinese Foreign Ministry’s Department of International Organisations and Conferences, said world was worried about climate change and whether countries would honour their Paris commitments.

“As far as China is concerned, my president has made it extremely clear, crystal clear, China will do its part,” Li told reporters.

It’s not always been this way. China has been through a long, tough learning process to become a more responsible power.

In 2013, China, angered with Manila over the long dispute on the South China Sea, only stumped up meagre aid to the Philippines after it was hit by Super Typhoon Haiyan, prompting rare dissent in the influential Chinese state-run tabloid the Global Times that Beijing’s international image would be hit.

It also will not be plain sailing. On certain key core issues including the self-ruled island of Taiwan, China will not back down.

In its first official reaction to Trump taking office, China’s Foreign Minister urged his administration to fully understand the importance of the “one China” principle, which Trump has called into doubt and under which Washington acknowledges China’s position of sovereignty over Taiwan.

China also expects that under the Trump administration it will be left alone on one issue that has long dogged ties with Washington – human rights.

The WeChat account of the overseas edition of the ruling Communist Party’s official People’s Daily noted with approval on Saturday that Trump’s inaugural speech neither mentioned the words “democracy” nor “human rights”.

“Perhaps looking back, these things have been hyped up too much” by U.S. politicians, it added.