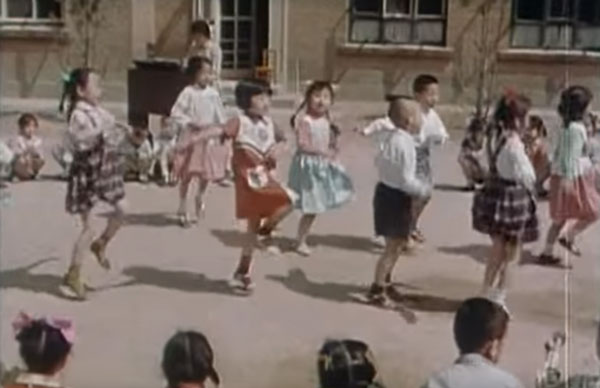 The documentary focuses primarily on the lives of contemporary working class Chinese people.

A documentary on China, concentrating mainly on the faces of the people, filmed in the areas they were allowed to visit. The 220 minute version consists of three parts. The first part, taken around Beijing, includes a cotton factory, older sections of the city, and a clinic where a Cesarean operation is performed, using acupuncture. The middle part visits the Red Flag canal and a collective farm in Henan, as well as the old city of Suzhou. The final part shows the port and industries of Shanghai, and ends with a stage presentation by Chinese acrobats. [Will Gilbert]

According to cinematographer Luciano Tovoli this documentary was shot mostly handheld with an ‘Eclair NPR’ 16mm camera using available light. In 1972, during Mao’s Cultural Revolution, Michelangelo Antonioni was invited by the People’s Republic of China to direct a documentary about New China. The result was a three-and-a-half-hour long film, divided into three parts. Mao disliked it so much that Michelangelo Antonioni was consequently charged with being anti-Chinese as well as counterrevolutionary. The movie was finally shown at Beijing’s Cinema Institute 30 years later.”