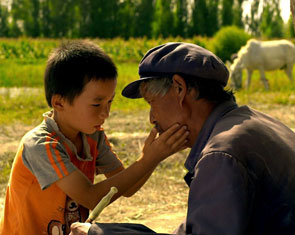 73 year old Lao Ma and Lao Cao were once famous carpenters in the village, they would partner with elders from the neighboring villages to make coffins.

Today, they are old. Their bodies are no longer as agile as they had once been. The government has implemented the practice of cremation. Never again will the elderly call on Lao Ma and Lao Cao to make coffins. Before Lao Cao passed, he asked Lao Ma to help him make a coffin for him to be buried in. The two worked together to make the coffin. When the Mid-Autumn drew near, Lao Ma’s daughter invited him to celebrate the holiday with her. After Lao Ma returned to the village, Lao Cao was not to be seen amongst the elderly gathered by the haystack. Someone beside him whispered that Lao Cao had passed away and been secretly seen in the cornfields on the opposite shore of Caozi Lake. Lao Ma claimed to have seen a white crane in Caozi Lake, but none of his children believed he was telling the truth. As a result, Lao Ma became the brunt of many jokes in the village for quite some time. Since then, Lao Ma would wait by the lake every day for the white crane. Lao Ma’s grandson would ask him why he waited for the white crane to which Lao Ma would say, “I worked so hard to raise your father, uncle, and aunt, and they want to turn me into a pile of ash, I want to have the white crane carry me to heaven.” Ma’s grandchildren helped him to realize his wish…

An old man wishes for his soul to ascend to heaven, while simultaneously being unable to give up his visceral claim to the earth. When the old man finally faces his corporal demise, he sees no reason to save his body as this is his path to freeing his soul. The story of this old man allows me to slowly, ever so slowly, understand that the earth is an end merged together with a beginning, and all of this is simply a divine game in a profane world. 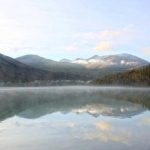 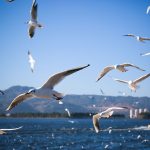 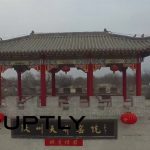 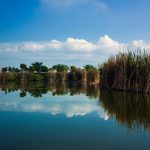 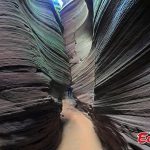