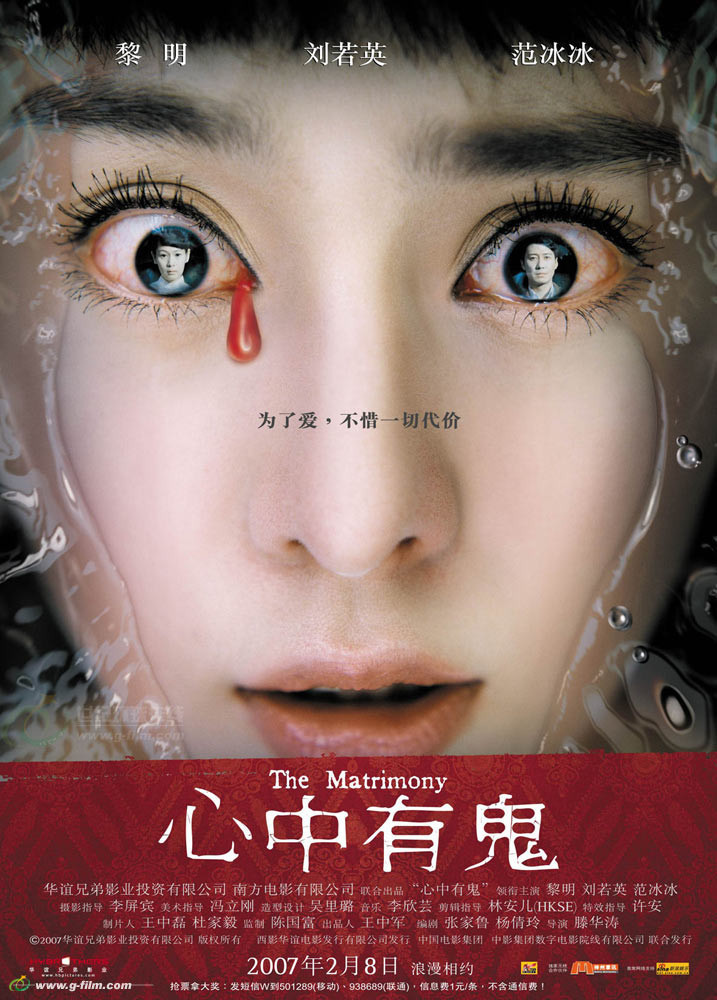 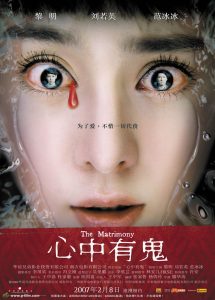 A woman finds the key to a room in the attic that her husband forbids her from entering. When she opens the door, she is confronted with the haunting existence of the woman her husband refuses to forget.

A woman finds the key to a room in the attic that her husband forbids her from entering. When she opens the door, she is confronted with the haunting existence of the woman her husband refuses to forget.

Collections: Hua-Tao Teng
Tagline: How far will you go for the one you love...
Genres: Drama, Horror, Thriller, Foreign

A sumptuously photographed ghost film that’s also a complicated romance and a meditation on nostalgia, The Matrimony is a sign of the maturing potential of China’s developing commercial film industry.

Just as important is the precedent set by having this mature ghost story appear on Chinese screens, For a long time, the Chinese censors haven’t allowed ghost films at all, as part of a policy of discouraging “old superstitions” and “unhealthy practices”. But, in the wake of audiences across Asia embracing Japanese, Korean, and Hong Kong horror films, it seems that the mainland market has its own ineluctable demands, and filmmakers and the Film Bureau have no choice but to follow suit.

Some time in the 1930s, cinematographer Shen Junchu (played by Beijing-born Hong Kong megastar Leon Lai) has been languishing, depressed and asthmatic, in his mother’s sumptuous but spooky house on the outskirts of Shanghai. His new young wife Sansan (the elegant Taiwanese singer and actress Rene Liu) seems like a prisoner there: Junchu ignores her, or rudely rebuffs her attempts to serve him. Swarms of bats fly overhead at night; mysterious noises emanate from the locked attic (Junchu’s workroom); and creepy servant Rongma (Xu Songzi) seems to have a secret agenda and terrifies her mistress with her special recipes for bat soup and leech broth. We soon discover that Junchu’s true love, the wide-eyed radio host Xu Manli (played by current Chinese beauty-of-the-moment Fan Bingbing) died in a car accident. He has been emotionally and professionally paralyzed ever since.

This very A-list ghostly romance is gorgeously lit and photographed: Hou Hsiao-hsien’s cinematographer Mark Lee Ping-bin (who also shot After This Our Exile in this year’s FEFJ) gives the film a visual polish and sophistication that’s pure pleasure to watch. A masterful control of colour extends from the ghostly blue of the haunted attic, to Manli’s passion-red studio, to nostalgic-sepia of Junchu’s reminiscences, to the softly elegant whites and greys of a waterside town in winter. Lee Siu-yin’s music adds to the atmosphere, providing subtle hints of romantic rapture or breathless suspense where appropriate. And Koan Hui’s amazing ghostly special effects gain power from their elegance and restraint.
The A-list cast is pan-Chinese.

Mainlander Fan Bingbing (who impressed in Cellphone at FEFJ 2004) has her meatiest role yet. With her supernaturally large and limpid eyes, the actress makes a fair claim to inherit Joey Wang’s crown as Chinese cinema’s new ghostly beauty.

Rene Liu, one of the most reliably professional Asian actresses today, is perfectly cast as the once-innocent country girl Sansan whose exposure to the terrors of urban decadence threatens to engulf her.

Leon Lai is at his cooly handsome best, in a performance reminiscent of his fine turn in Peter Chan’s similarly disturbing Three: Going Home. Smaller roles, like ghost-buster Rongma and the imposingly matriarchal Madame Shen are cast with fine actresses from an earlier generation, Xu Songzi and Zheng Yuzhi respectively.