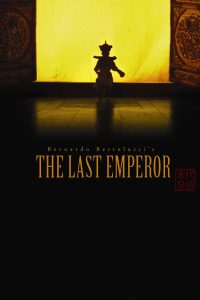 A dramatic history of Pu Yi, the last of the Emperors of China, from his lofty birth and brief reign in the Forbidden City, the object of worship by half a billion people; through his abdication, his decline and dissolute lifestyle; his exploitation by the invading Japanese, and finally to his obscure existence as just another peasant worker in the People's Republic.

A dramatic history of Pu Yi, the last of the Emperors of China, from his lofty birth and brief reign in the Forbidden City, the object of worship by half a billion people; through his abdication, his decline and dissolute lifestyle; his exploitation by the invading Japanese, and finally to his obscure existence as just another peasant worker in the People's Republic.

Collections: Bernardo Bertolucci
Tagline: He was the Lord of Ten Thousand Years, the absolute monarch of China. He was born to rule a world of ancient tradition. Nothing prepared him for our world of change.
Genres: Drama, History

A dramatic history of Pu Yi, the last of the Emperors of China, from his lofty birth and brief reign in the Forbidden City, the object of worship by half a billion people; through his abdication, his decline and dissolute lifestyle; his exploitation by the invading Japanese, and finally to his obscure existence as just another peasant worker in the People’s Republic.

The Last Emperor (L’ultimo imperatore) is a 1987 British-Italian epic biographical film about the life of Puyi, the last Emperor of China, whose autobiography was the basis for the screenplay written by Mark Peploe and Bernardo Bertolucci. Independently produced by Jeremy Thomas, it was directed by Bertolucci and released in 1987 by Columbia Pictures. Puyi’s life is depicted from his ascent to the throne as a small boy to his imprisonment and political rehabilitation by the Communist Party of China.

The film opens in 1950, five years after the capture of Puyi by the Red Army when the Soviet Union entered the Pacific War in 1945 and his having been kept in their custody. In the recently established People’s Republic of China, Puyi arrives as a political prisoner and war criminal at the Fushun Prison. Soon after his arrival, Puyi attempts suicide, but is quickly revived and told he must stand trial. Throughout the film there is a series of flashbacks.

42 years earlier, in 1908, Puyi is summoned to the Forbidden City by the dying Empress Dowager Cixi. After telling him that the previous emperor had died earlier that day, with her last words, Cixi tells Puyi that he will be the next emperor. After his coronation, Puyi, frightened by his new surroundings, repeatedly expresses his wish to go home, which is denied him. Despite having scores of palace eunuchs and maids to wait on him, his only real friend is his wet nurse, who accompanied him and his father to the palace on the Empress Dowager’s summons.

The next section of the film continues the series of chronological flashbacks showing Puyi’s early life: from his imperial upbringing in the Forbidden City with his younger brother, Pujie, during the Republican era, his tutelage under the kindly Scotsman Reginald Johnston, his marriage to Wanrong, and his increasing rebellion against traditional court practices, to his subsequent exile in Tientsin following the Beijing Coup, his Japanese-supported puppet reign of Manchukuo, and then his capture by the Red Army – all intermixed with flash-forwards portraying his prison life in the 1950s.

Under the “Communist re-education programme” for political prisoners, Puyi is coerced by his interrogators to formally renounce his forced collaboration with the Japanese invaders for war crimes during the Second Sino-Japanese War. Finally, after a heated discussion with the camp commandant and upon watching a film detailing the wartime atrocities committed by the Japanese, Puyi recants his previous stance and is considered rehabilitated by the government; he is subsequently set free in 1959.

The final minutes of the film show a flash-forward to 1967 during the rise of Mao Zedong’s cult of personality and the beginning of the Cultural Revolution. By now, Puyi has become a simple gardener who lives a peasant proletarian existence. On his way home from work, he happens upon a Red Guard parade, complete with children playing pentatonic music on accordions en masse and dancers who dance the rejection of landlordism by the Communists. His prison camp commander, who helped him greatly during his rehabilitation, is forced to wear a dunce cap and a sandwich board bearing punitive slogans, and is one of the political prisoners now punished as an anti-revolutionary in the parade.

In the epilogue, Puyi later visits the Forbidden City as an ordinary tourist. There he meets an assertive little boy wearing the red scarf of the Pioneer Movement. The young Communist orders Puyi to step away from the throne. However, Puyi proves to the boy that he was indeed the Son of Heaven, proceeding to approach the throne. Behind it, Puyi finds a 60-year-old pet cricket that he was given by an elderly Mandarin on his coronation day and gives it to the child. Amazed by the gift, the boy turns to talk to Puyi, but the emperor has disappeared.

The film ends with a flash-forward to 1987 where a tour guide is leading a group through the palace. Stopping in front of the throne, the guide sums up Puyi’s life in a few, brief sentences, concluding that he died in 1967. The picture freeze-frames on the throne and the credits roll.

Bernardo Bertolucci proposed the film to the Chinese government as one of two possible projects – the other was an adaptation of La Condition Humaine (Man’s Fate) by André Malraux. The Chinese preferred The Last Emperor. Producer Jeremy Thomas managed to raise the $25 million budget for his ambitious independent production single-handedly. At one stage, he scoured the phone book for potential financiers. Bertolucci was given complete freedom by the authorities to shoot in The Forbidden City, which had never before been opened up for use in a Western film. For the first ninety minutes of the film, Bertolucci and Storaro made full use of its visual splendour.

It was a very long and difficult period to set it up, full of nightmares, it was like a dark tunnel, to shoot for six months in China, not being able to stop, but out of it came this beautiful thing, and I have totally forgotten all the nightmares. I just think about what an extraordinary experience it was to be in China at the beginning of open doors, to be allowed to make that film there, with a filmmaker like Bertolucci, with whom I have managed to continue a wonderful relationship and friendship for more than twenty years now and six movies. So that was a big point for me in my life and career.

When you make films in different places, you need to find the mercenary warriors to help you make the film, because no man is an island. The best technicians came to work on the film, like Vittorio Storaro and the designer Ferdinando Scarfiotti, and James Acheson the costume designer. So a group of professionals plus a tremendous amount of support from Italy, because the Italian government and the Chinese were very close. So there was a bonding between the Italians and Chinese. In fact the British Council and British Embassy were rather hands off when we arrived there, they came to claim it later but… If an Emperor can become a gardener then what better, and one day they will tell this story. And then we came and we told that story. Of an Emperor, son of Heaven, ruler of a quarter of the world, one man, and he died as a gardener. So this was an irresistible and grand epic idea. It was terrifying but it happened.

The difficult thing about the success of that film was that it was a difficult film to emulate, and I have never been to that pinnacle of a certain type of film. And I doubt if I ever would or could make a film like that again. I don’t know how one would have made those films in the independent arena today. There were no digital shots, it was before digital, and filmed with real people.

19,000 extras were needed over the course of the film. The Chinese army was drafted in to accommodate.

The film was originally released by Columbia Pictures, although they were initially reluctant, and producer Thomas had to raise a large sum of the budget independently. Only after shooting was completed did the head of Columbia agree to distribute The Last Emperor in North America. Columbia later lost the rights when it reached home video through Nelson Entertainment, which released the film on VHS and Laserdisc. The film also received a Laserdisc release in Australia in 1992, through Columbia Tri-Star Video. Years later, Artisan Entertainment acquired the rights to the film and released both the theatrical and extended versions on home video. In February 2008 The Criterion Collection (under license from now-rights-holder Thomas) released a four disc Director-Approved edition, again containing both theatrical and extended versions. Criterion released a Blu-ray version on 6 January 2009.

The Last Emperor had an unusual run in theatres. It did not enter the weekend box office top 10 until its twelfth week in which the film reached #7 after increasing its gross by 168% from the previous week and more than tripling its theatre count (this was the weekend before it was nominated for the Academy Award for Best Picture). Following that week, the film lingered around the top 10 for 8 weeks before peaking at #4 in its 22nd week (the weekend after winning the Oscar) (increasing its weekend gross by 306% and nearly doubling its theatre count from 460 to 877) and spending 6 more weeks in the weekend box office top 10. Were it not for this late push, The Last Emperor would have joined The English Patient, Amadeus, and The Hurt Locker as the only Best Picture winners to not enter the weekend box office top 5 since these numbers were first recorded in 1982.

The film was converted into 3D and shown in the Cannes Classics section at the 2013 Cannes Film Festival.