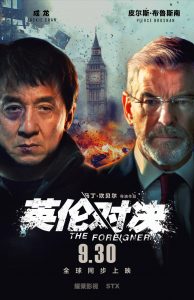 The IRA took his family. The police looked the other way. Now he must get revenge.

The IRA took his family. The police looked the other way. Now he must get revenge.

Collections: Martin Campbell
Tagline: The IRA took his family. The police looked the other way. Now he must get revenge.
Genres: Thriller, Action

A Chinese restaurant owner in London is devastated in an attack orchestrated by rogue Irish terrorists.

Based on “The Chinaman” by Stephen Leather.

On 5 June 2015 it was announced that Jackie Chan would next star in the action thriller film The Foreigner, another project by STX Entertainment, based on the Stephen Leather’s novel The Chinaman. Nick Cassavetes was one of the directors revolving to sign for the film, which was scripted by David Marconi. The film would set in London’s Chinatown, where a restaurant’s owner is forced to cross all boundaries to track down the Irish terrorists responsible for the death of his beloved daughter. On 15 July 2015, Deadline reported that Martin Campbell was in talks to direct the untitled film, previously known as The Foreigner, while Relativity Media was revolving to finance the film. David Marconi adapted the book, which Wayne Marc Godfrey would produce. Pierce Brosnan joined the cast alongside Jackie Chan in November. Liu Tao and Jackie Chan attended the Shanghai Film Festival on 11 June 2016 to promote “The Foreigner”.

Principal photography commenced in January 2016. The filming in London of a scene involving the explosion of a bus on Lambeth Bridge caused widespread alarm, as people were not aware that it was a stunt. Scenes were shot in Regent High School, Camden and Charrington Street on 18 February 2016. [Wikipedia]