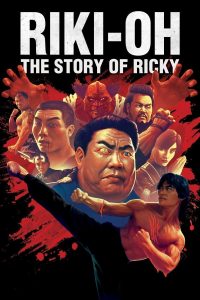 Hard man Ricky is incarcerated in a futuristic prison where ultra-violence is his only means of survival in the corrupt, sadistic system. He must battle his way quite literally 'through' the feared 'gang of four', and undergo multiple tortures before facing the governor in one of the goriest climaxes ever seen.

Hard man Ricky is incarcerated in a futuristic prison where ultra-violence is his only means of survival in the corrupt, sadistic system. He must battle his way quite literally 'through' the feared 'gang of four', and undergo multiple tortures before facing the governor in one of the goriest climaxes ever seen.

Hard man Ricky is incarcerated in a futuristic prison where ultra-violence is his only means of survival in the corrupt, sadistic system.

By the year 2001, all correctional facilities have been privatized. Lik Wong/Ricky Ho, a martial artist, and former music student, is sentenced to 10 years in prison for manslaughter after killing a crime lord indirectly responsible for the death of his girlfriend Keiko/Anne after a group of thugs chased her off the building to her death after witnessing their heroin deal. It is revealed in a flashback Ricky’s name as a child was Rick, but his uncle, after seeing how strong he was, decided the name Ricky was suitable.

An elderly inmate, Ma/Omar, is attacked by the captain of the cells Wildcat/Samuel. Ricky trips Samuel, who falls face first on a piece of wood with nails. After this, one of the inmates suggests that Zorro, a dangerous, morbidly obese inmate should kill him. Omar is informed by the guards that his probation was turned down after Samuel lies, telling the guards that Omar was spreading rumors. Stricken by grief, Omar hangs himself. Zorro attacks Ricky but is killed by Ricky’s bare hands. Ricky thwarts Samuel’s attack and kills him as well.

Shortly after, a member of the Four Heavenly Kings (Gang of Four in the English dub) named Hai/Oscar the leader of the North Cell, suggests that Ricky see the one-eyed Assistant Warden Dan. After Ricky’s confrontation, Dan suggests Oscar kill him. Outside the prison yard, Oscar and Ricky engage in a fight. After losing an eye, Oscar cuts a hole in his stomach and uses his intestines to strangle Ricky. Ricky breaks free, delivering a crushing blow which kills Oscar. Ricky soon discovers that the Gang of Four is growing illegal opium for profit. Huang Chung/Rogan, leader of the West Cell, discovers Ricky set the poppy garden on fire, leading to a fight. Brandon, leader of the South Cell, throws needles to tie Ricky up with them, leaving him defenseless. Meanwhile, the guards report to Dan that the Warden is returning from his vacation, prompting Dan to raise the Zero Alarm, causing the defense system to shoot anyone outside their cell. As the fight continues, Tarzan, leader of the East Cell, arrives announcing his intent to fight Ricky but leaves along with the Gang as the Zero Alarm goes off.

The next day, the Warden and his spoiled son return from their vacation. Dan informs the Warden about the incidents, including the poppy garden. This infuriates the Warden, almost transforming into a Hulk-like creature, though he prevents it by taking medication. As the Warden questions Ricky, Tarzan bursts through the wall to fight Ricky, which ends in Ricky dismembering half of Tarzan’s left arm and breaking his mandible. The Warden activates a ceiling trap on Ricky who struggles to stay alive. Tarzan regains consciousness and holds the ceiling, only to unintentionally save Ricky by being crushed himself. After escaping, Ricky finds a photo showing Tarzan had a family waiting for him. The Warden orders the inmates bury Ricky alive, which they reluctantly obey. The Warden proposes if Ricky survives underground for a week, he will free him. Ricky does survive by eating dog meat, however, the Warden denies him freedom. Later that night, Ricky is brought food by an inmate Freddy. Another inmate informs Dan who mortally wounds Freddy. Dan then opens Ricky’s cell to taunt him. However, Ricky breaks free and kills the inmate and knocks out Dan’s remaining eye. The inmates then rebel and violently ambush Dan.

In the kitchen, Ricky, the prisoners, and Dan burst through the wall. The Warden shoots Dan with a homemade gas-pressured bullet, causing him to inflate and violently explode. Rogan and Brandon confront Ricky, who gravely injures Rogan. Brandon, realizing Ricky is far too powerful for him, flees from the scene, but not before the Warden shoots and kills Brandon. The Warden, revealing that he too, is a martial artist, transforms into a grotesque creature and battles Ricky. The fight ends with Ricky crippling and throwing the mutated Warden into a meat grinder. The prisoner’s rebel once again and start to attack the guards until Ricky reaches the prison wall, breaking it allowing the prisoners and himself to go free. [wikipedia]