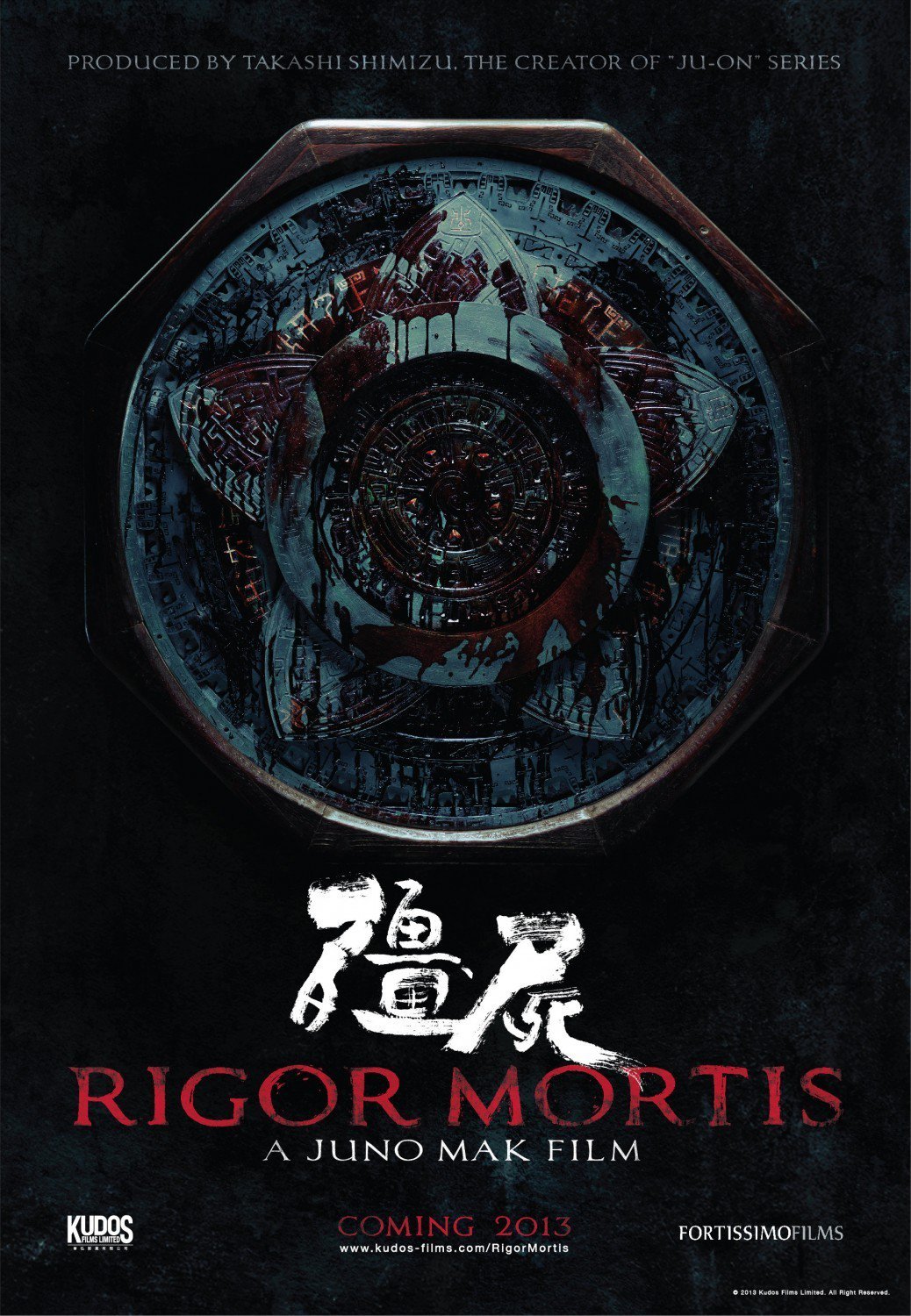 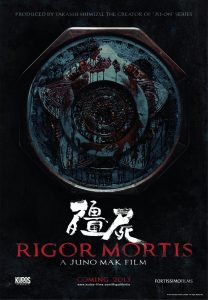 Rigor Mortis is a 2013 Hong Kong horror film directed by Juno Mak, and also produced by Takashi Shimizu. The film is a tribute to the Mr. Vampire film series. Many of the former cast are featured in this film: Chin Siu-ho, Anthony Chan, Billy Lau and Richard Ng. Additionally, Chung Fat, who starred in Encounters of the Spooky Kind, is also featured.

Formerly successful actor Chin Siu-ho, star of Mr. Vampire, becomes depressed and suicidal when his wife leaves him. He moves into a dilapidated apartment building, where he meets Uncle Yin, the building’s long-time, friendly supervisor. Yin performs a welcoming ceremony, and Chin insists that Yin take a gratuity saying that, “It’ll become necessary,”. After listening to a recorded message left by his young son, Chin attempts to hang himself. His action draws the attention of twin ghosts who haunt the apartment, and they possess his body. Yau, a retired vampire hunter, bursts into the room, cuts down the noose, and exorcises the spirits from Chin’s body. Alerted by the commotion, his neighbors gather at the doorway before Yau disperses them.

Later, Chin visits Yau’s restaurant, where Yau explains that he has taken up cooking glutinous rice, an ingredient used in fighting jiangshi. Chin thanks Yau for saving his life, but Yau tells him to save his gratitude for a time when he can save Chin’s life without the threat of suicide. Chin then meets several of his neighbors, including Yang Feng, a traumatized woman with mental instability and her albino son, Pak. The audience is also introduced to seamstress Auntie Meiyi and her husband Uncle Tung. Later that night, in a dream, Tung tells Meiyi that he must leave her for several days and requests that she wait for him. In reality, Tung has fallen down the stairs and died. Black magic practitioner Gau discovers the body and preserves it for Meiyi, who requests that he resurrect her husband. They begin the process of preserving and gradually resurrecting Tung’s corpse while keeping it concealed in her bathroom.

Chin later discovers that Yin has been providing shelter for Yang and Pak, who are connected to the ghostly twins. Yin explains with the aid of a flashback, that in life, the twins were students being tutored by Yang’s husband in apartment 2442. There, he assaulted and raped one of the sisters and upon discovering the brutal rape, the other twin stabs Yang’s husband to death. After a scuffle, the final image depicts the dead tutor surrounded by the corpses of the twins; one dead on the floor next to him, the other hung from the ceiling fan. After hearing this, Chin attempts to seek help from Yau in permanently ridding the apartment of the twins, but Yau refuses and claims to simply be a cook now. Before leaving Yau’s apartment, Chin remarks that if he truly was just a cook, he wouldn’t have kept all the exorcism memorabilia from his Father, notably the large, round talisman mounted on the wall. Chin then turns to Gau, and the two summon the twins who proceed to possess Chin once again. Hearing the sounds of Gau and Chin fighting, Yau investigates and joins the fray. Together, Gau and Yau are able to exorcise the ghosts and bind them into a sturdy cabinet. Yau rebukes Gau for his use of Chin as bait and advises him to burn the cabinet. Gau promises to do so, and they leave Chin to recover.

Unsatisfied with her husband’s lack of progress, Meiyi seeks further help from Gau, who counsels her to continue waiting. Gau eventually relents and suggests an alternative to the crow’s blood she has been feeding Tung every night: the blood of a virgin. While they are discussing their options, Yin arrives to investigate the disappearance of Tung. Afraid that Yin suspects the truth, Meiyi murders him by bashing his head in. Later, Yau requests that she watch over Pak for a bit. When Pak requests to use the bathroom, she hesitates only briefly before seizing the opportunity and locks him in the room with Tung. While the child is horrifically murdered, Meiji stands on the other side of the door, tears streaming down her face. In a cut scene, the talisman in Yau’s room activates, signaling the presence of a powerful evil. Now risen as a jiangshi, a disfigured Tung haunts the apartment complex. His first victim, a mortally wounded Gau reveals to Yau that he planned to use Tung & the twins to help extend his life, but Meiyi let Tung loose.

Distraught, Yang searches the apartment building for her missing son. When she finds the rattling cabinet, she assumes he is inside and hastily she opens it, unintentionally and unknowingly releasing the twins’ ghosts. After searching a bit more she encounters Pak, now a specter. Filled with rage and sorrow, she slits her left wrist to lure out the jiangshi. She attempts to destroy him with a makeshift weapon, but ultimately, Tung kills her. Moments later, Chin shows up with a Molotov cocktail and sets Tung aflame, seemingly defeating him. However, the twins arrive and quickly possess Tung’s corpse. Now more powerful, he easily impales Chin and leaves him for dead. Chin manages to free himself despite being heavily injured and finds Yau. He begs that Yau give him enough strength for one last fight. Initially reluctant, as it might risk Chin’s life, Yau relents and sets a trap for Tung. With his vampire hunting tools, Yau weakens Tung enough for Chin to finally destroy him. As Tung slowly crumbles to ash, Meiyi joins him by slitting her throat. Chin and Yau, wounded by the battle, both collapse.

In the final sequence, it is shown what would have happened had there been no supernatural elements. Chin is again depicted moving into the apartment complex, but it is less run-down, and the residents are less eccentric: Yin does not interact with him, Yang and Pak are depicted as happy and friendly neighbors, and Meiyi is a widow who is shown admiring a picture of Tung. Chin successfully commits suicide, and an ineffective Yau discovers him too late to save him. At the morgue, Chin’s son who is actually an adult and not a child as previously depicted, identifies the body to the medical examiner, Dr. Gau. [wikipedia]