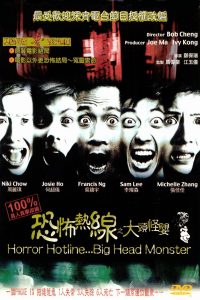 A reporter and the producer of "Horror Hotline", a popular radio call-in show, investigate a caller's tale about a terrifying mutant infant that caused several deaths in the 1960s and seems to be making people disappear today.

A reporter and the producer of "Horror Hotline", a popular radio call-in show, investigate a caller's tale about a terrifying mutant infant that caused several deaths in the 1960s and seems to be making people disappear today.

Beneath its cheesy title, there lurks one of the most inventive Hong Kong psycho-thrillers of recent years in Horror Hotline …

Big Head Monster, one of the very few to come close to replicating the clammy chills of late ’90s Japanese pics like The Ring. Stirring in a finale straight from Blair Witch Project, a David Lynch-like interest in the grotesque and a dose of HK exaggeration, this has ready-made cult appeal. Ben is producer of a latenight radio show, “Horror Hotline”, that showcases phone-ins of real-life ghost stories.

A particularly nasty one is offered by someone calling himself Chris Kwan, who tells of an experience 30 years ago when he and six pals at primary school found a mutant, big-headed baby “with many eyes” in a cage near their school. The situation wasn’t helped when the school principal, an Iranian, tried to exorcise the monster by reading from the Koran. Along with an American TV reporter, Mavis Ho, who’s profiling his program, Ben tracks down the Iranian, now on the verge of death in a hospital, cared for by his adopted daughter, Connie. Meanwhile, unknown to Ben and Mavis, in another hospital, Ben’s live-in partner, Helen, a nurse, is caring for a young man who’s been traumatized by a pre-credits encounter with said Big-Head Monster. Also unknown to Ben, Helen recently had a secret abortion and is on the verge of leaving him. In a similar way to, say, the pilot of Lynch’s Twin Peaks, there’s a feeling here that the viewer is only being given a glimpse of a whole back story that has yet to be unraveled. Pic ends, literally, on a scream and a blackout, with the viewer left to start putting together the multitude of threads (many centered on the process of childbirth). There’s enough material here to fuel a whole series, of which this movie is only the taster. In his second theatrical feature, after the interesting Diamond Hill (2000), helmer Cheang Pou-soi – here signing himself Soi Cheang – shows a considerable grasp of atmosphere in individual sequences. Little is shown explicitly (including the title figure), and the gradual pacing is more similar to South Korean and Japanese psycho-thrillers than restless Hong Kong horror movies, with some genuine shocks.