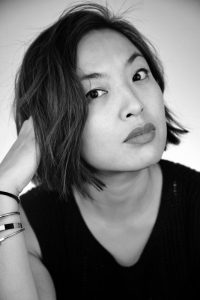 Cathy Yan is a filmmaker based in New York City, born in China and raised between Hong Kong and Washington, DC.

She received her MBA from NYU’s Stern School of Business and is pursuing an MFA at the Tisch Graduate Film Program.

Her directorial debut, the short film LAST NIGHT, premiered at the Shanghai Int’l Film Festival. Producing credits include the feature film, COLOR OF TIME, as well as an upcoming feature documentary with director Kevin Macdonald (LAST KING OF SCOTLAND). Previously, she was a reporter for the Wall Street Journal in New York, Hong Kong and Beijing. She was one of the youngest writers in the paper’s history to pen multiple front-page stories. Cathy graduated from Princeton University, magna cum laude, with a bachelor’s degree in the Woodrow Wilson School of International and Public Affairs. She is developing DEAD PIGS, a feature set in Shanghai, as well as a comedic series about a disapproving Korean mother.

A bumbling pig farmer, a feisty salon owner, a sensitive busboy, an expat architect and a disenchanted rich girl converge and collide as thousands of dead pigs float down the river towards a rapidly-modernizing Shanghai, China. Based on true events.