The list of the top snacks, sweets, and desserts to eat during the Lunar New Year according to the Chinese culinary tradition.

Fried sesame balls 煎䭔 (jiānduī) are generally a sweet filled with a lotus or red bean paste and then covered with sesame seeds. Their origins can be traced back to the Tang Dynasty as palace food in Chang’an, known as碌 䭔 (lüdui). This food was also added in a poem by Tang poet Wang Fanzhi. With the southward migration of many peoples from central China, fried sesame balls have become part of southern Chinese cuisine. They have been considered a lucky food since as the dough balls fry, they expand, so it is believed that if you eat these treats your luck will expand similarly.

Hawthorn candies and flakes 山楂 糖 山楂 片 (bingtang hulu), are a snack originally from Beijing, which can also be found in other parts of China. Traditionally they are made by covering the hawthorn fruits with a layer of melted sugar that hardens when cooled, giving it its characteristic crunchiness. Hawthorn candies can be served alone or on a skewer, or in slivers like flakes. The latter shape makes this specialty easier to carry, being therefore compacted, which is why they are a popular gift for children. Its origins are said to date back to the ancient Chinese Song dynasty and were originally a medicine for the ailing concubine of Emperor Song. After her recovery, they became very popular in China not only as a snack but also as a digestive aid. This snack wishes good health for the little ones and adults.

“Kueh bahulu” 鸡蛋糕 (Ji Dan Gao) is a pastry product reminiscent of the French madeleine, which is why they are called Asian madeleines. This snack is an institution in Chinese families in Singapore, Malaysia, and Indonesia during the holiday season across different cultures. The origins of the snack are Malaysian and through the Portuguese, it has been adapted to the local tastes of Southeast Asia. Similar to (bak kwa), kueh bahulu is prepared over a charcoal fire, unlike its original Western variant. The snack’s popularity and goodness have allowed it to be adopted by Chinese families as a festive snack and Chinese New Year cookie. Its shape leads it to represent abundance. In the past, these traditional miniature cakes were difficult to bake on hot charcoal, so they have since been considered a valuable snack, as they require patience.

This snack, tapioca biscuits, also called Kui bangkit 薯粉饼 (Shǔ fěnbǐng) was originally made in the shape of a gold bar or coin from ancient China and was used as an ancestral offering or to allow the dead to use them as a currency to spend in the Chinese afterlife. The only controversy lies in the white color, which is not usually used by Chinese people on holidays, but its goodness overcomes this obstacle and this white and crumbly snack has been adapted to a staple of the Chinese New Year, in fact, it is common to see the cookies modeled in auspicious Chinese symbols such as flowers and various animals, to announce luck in families. For example, a goldfish symbolizes prosperity, while a chrysanthemum represents luck “.

The glutinous rice cake 年糕 (Niángāo – nyen-gaoww) is a traditional Chinese New Year recipe, it is also known as “cake of the year”. The cake is also bought wrapped in banana leaves, in advance by Chinese families to let it rest and harden for a few weeks before being ready for consumption during the New Year celebrations. This sticky rice cake in most of China is made from glutinous rice flour and sugar. Ingredients may also include chestnuts, Chinese dates, white sesame seeds, red bean paste, jujube puree, and lotus leaves. There are several ways to cook and taste it: some steam it, others fry it dipped in eggs to add crunchiness. The glutinous rice cake also has many regional variations that it almost feels like a completely different specialty. In the north, these cakes are more like desserts and snacks. In the Shanghai style, they are pan-salted while those of the Cantonese style are sweet in the pan. Nian Gao boiled, steamed, or cooked with vegetables and meat are also used as a substitute for rice or noodles. It is also found in different forms, such as that of a pair of carp or in ingots to represent abundance and wealth. Its history is linked to the area of Suzhou, where it is said to have been invented in ancient times. During the war, it was the food that helped preserve the Chinese people from a period of famine, thanks to the cleverness of the prime minister 伍子胥 Wu Zixu from the Wu dynasty, “Niangao” cake is said to have saved many lives from starvation. Prime Minister Wu reportedly told the soldiers to dig a hole under the city walls before his death. Following his advice, people would discover that the underground bricks were made of glutinous rice flour and were edible, thus they were saved from starvation. The bricks later became known as today’s “niangao”. This cake is eaten with family to symbolize greater prosperity. In Chinese, 年年 高 (niánnián gāo – nyen-nyen gaoww) means “to increase from year to year”. This symbolizes that there will be an uprise and therefore a general improvement of life in all its aspects. Eating the cake symbolizes reaching new heights in the coming year. It was already popular during the Wei and Jin dynasties (220-420). In ancient times it was offered to ancestors and gods, as well as to nobles. Later over the years, it has become a traditional Spring Festival dish. The cake given to friends can be offered with the wish 年年 高 (nián nián gāo) 过年 好 (guò nián hăo) Happy New Year! Year by year! “May it be a more prosperous year than the last”!

Prosperity Cakes, 发糕 (fāgāo) are steamed rice flour cakes and often dyed yellow or pink to add to the festive atmosphere. The Chinese character fa means both yeast and prosperity or bred, which is why these fine cakes are known as prosperity cakes. When cooked, they split at the top and “bloom”. The more petals bloom, the greater the prosperity. The sweetness of this dessert symbolizes bringing a touch of sweetness into life and the new year. The Hakkas call the “upper crack” of the pie “xiao”, which means a smile that looks like a sign of an upcoming fortune; therefore, the greater the uppercut, the better the wish.

Radish cakes 萝卜 糕 (luóbo gāo, lòbaahk gōu), originally from Guangdong province, are very important in Cantonese tradition during the spring festival celebrations on the occasion of the Chinese New Year, as the pronunciation for radish cake, 菜 頭 (chhài-thâu), is a homonym of luck. The cake is associated with the phrase 好 彩 頭, (hó-chhái-thâu), which means “Good luck” in the Hokkien language. This tradition is also present in Taiwan, where radish and/or turnip pies are also eaten for breakfast. 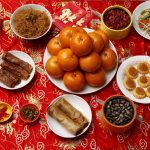 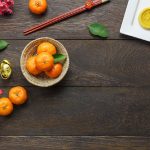 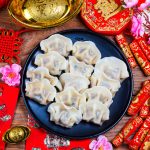 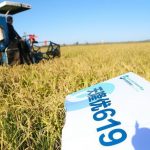 Rice of the eight treasures

This sweet sticky rice pudding 八寶飯 (Ba bao fan) represented great luck is literal, the promise of eight treasures for the lucky one who eats it. It is considered a feast for the eyes and the palate, as it is studded with delicacies. There may be walnuts, lotus seeds, almond kernels, jujubes, candied fruit, dried longan, prunes, red bean paste, ginkgo seeds, apricot kernels, goji, berries, and is dipped in a glistening syrup of sugar. The making of the pudding is an exercise of attention and care. The cook starts to make this recipe by placing the fruit and seeds in a pattern along the inside of a bowl, then adds a layer of cooked glutinous rice that has been sweetened and moistened with butter. Next, a circle of fruit is placed around the edge of the bowl, topped with a second layer of rice. This is followed by a circle of sweet red bean paste, smaller than the diameter of the bowl, which is topped with a final covering of rice. Once the bowl has been steamed and cooled, the cook transforms it into a mosaic of fruit and nuts that glisten under the sweet syrup that is poured over the dessert. In China, the number 8 is the lucky number par excellence, but this dessert is considered a good omen not only for its meaning but also for the fact that it is a very nutritious dessert.

Sweets 甜食 (Tiánshíare) are an important part of the celebrations and act as a gesture of union not only after meals but as gifts during visits to relatives and friends. Often on trays that have several partitions, sweets, cakes, candies, jellies, and seeds are all served together in a traditional dish called 八 宝盒 (bā bǎo hé). The tray of sweets that families traditionally use to welcome visiting guests during the Lunar New Year symbolizes the choice of trying to be all together in their sweet characteristics and diversity. These trays can be customizable, some add dehydrated fruit such as kumquat to wish prosperity, coconut to be together, longan to bring many children, and red melon seeds for happiness. Most trays have eight compartments as the quintessential lucky number.