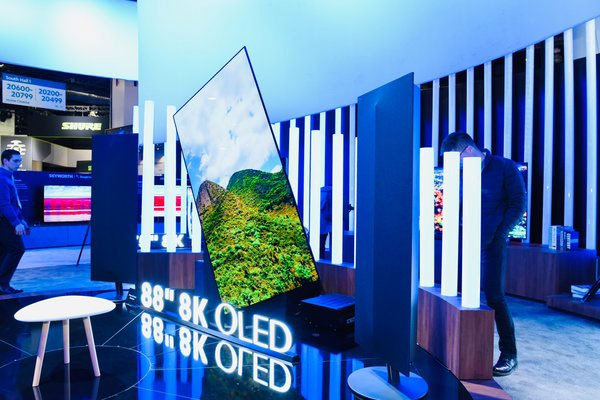 Skyworth, a leader in smart appliances and information technology, unveiled its smart home system and full lineup of new smart household appliances at the 2020 Consumer Electronics Show (CES), which opened on January 7 in Las Vegas.

The Skyworth Q91 8K Ultra HD TV and W81 Wallpaper OLED TV series, showcased to the world for the first time on January 5, led the lineup in Skyworth’s exhibition area at the event. The Q91 series is currently drawing the industry’s attention with its highly versatile configuration that not only supports 120FPS 8K for a higher definition picture but also comes equipped with an 8K IPS hard screen allowing wider viewing angles as well as a faster response that delivers a consistent and clear image quality from any angle. In addition, the series features one of the world’s most powerful TV chips, the MediaTek S900C TV SoC with support for 8K resolution, enabling smoother and faster processing and parsing of images. With Wallpaper OLED design and a split structure that seamlessly attaches to the wall and is only 4.6mm width at its slimmest point, the W81 series redefines wallpaper-thin TV products.

Furthermore, Skyworth also debuted its lineup of new models including transparent OLEDs, alongside swivel and frame models, as well as an aesthetic solution that the company has dubbed the “Suzhou Chinese Circle TV”, among others with unique and ornamental features converting the television set into a piece of furniture that fits in with the entire interior design of the home where the unit is being installed.

Skyworth’s smart lighting area at CES also surprised visitors with the OLED table lamp. OLED lighting has the distinguishing characteristic of being harmless to the eyes, making the technology the most recommended light source for reading. Interconnecting with the Skyworth smart home system, the OLED table lamp’s adjustable head is easily moved to place the light source into the most suitable position for reading, while the simple design of the body also complements the entire home environment.

The Smart Vehicle Experience Zone was also crowded with visitors, with the 7″ LCD screen, 9″ streaming rearview mirror with center console alongside other intelligent automotive accessories attracting much attention. Skyworth has already partnered with more than a dozen carmakers, including Geely, Renault, Brilliance Auto, Beijing Hyundai and Borgward, to provide matching parts and accessories in line with the technical characteristics and test requirements of each automobile make and model.

On display in Skyworth’s VR area was an end-to-end 8K VR live streaming solution, with multi-camera arbitrary switching, and the ability to add text, voice and special effects as well as other features that meet the 8K VR live streaming requirements for game events. Skyworth VR has put in place a special VR content production team to create a series of proprietary 8K VR dramas and, in 2020, plans to launch more than 100 hours of 8K videos featuring China’s most famous tourism attractions as well as 15 8K VR short plays to meet content needs across the industry.

In the age of interconnection, the smart home system is quickly evolving into a necessity for every home, with broader market prospects for 2020. Skyworth, with its smart screen as the medium and smart control technology as the core, has built a smart home system that truly differentiates itself from its rivals by delivering what shoppers have come to expect in the new year.

KONKA Announces Plans for New US Headquarter at CES 2020, Entering the US Market with an Integrated Global Innovation Strategy