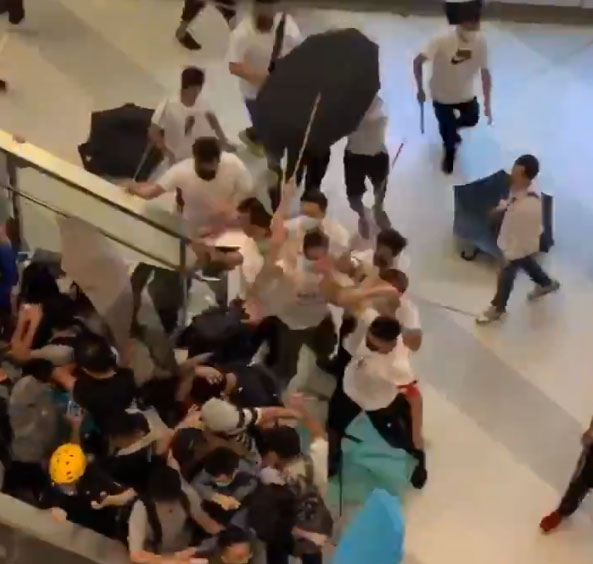 A mob dressed in white assaulted residents, protesters, journalists and a lawmaker in Yuen Long, hours after an anti-extradition law march ended.

At least 36 people had been sent to a hospital or had sought treatment, according to the Hospital Authority.

The organized group used bamboo sticks and other weapons to attack people in the West Rail Line station area, also injuring a representative of the democratic party Lam Cheuk-ting.

The protesters accused the police of not intervening to stop the attackers and instead used tear gas against the protesters in Sheung Wan.

In this video (sent by a friend) you can see the white-shirted thugs relentlessly beating up one person in a black shirt with long wooden sticks and umbrellas. Only some have masks – these thugs clearly do not fear any repercussions for their violent actions#YuenLong #antielab pic.twitter.com/4swUQUAOXs

“Real thugs have attacked passersby, a journalist and a lawmaker, badly injuring them, but the police have failed to enforce the law. This has angered us greatly,” the statement read.

While the protesters in Wan Chai, Central and Sheung Wan were facing the police in riot gear, at about 10:30 pm, the attackers headed for the trains, assaulting passengers with bamboo sticks and chasing whoever was wearing black clothes, witnesses said.

Pro-government gangsters randomly beating ppl up in Yuen Long MTR, with lawmakers and reporters being beaten by gangs.

No police had arrived on site on hour after ppl called 999 emergency line.#HongKongProtest pic.twitter.com/mXSft8jAXk

#HongKong protesters only have one question in mind now: Where was the Police? @hkpoliceforce

1 thought on “At least 36 injured as hundreds of masked men assault protesters, journalists, and residents in Hong Kong”