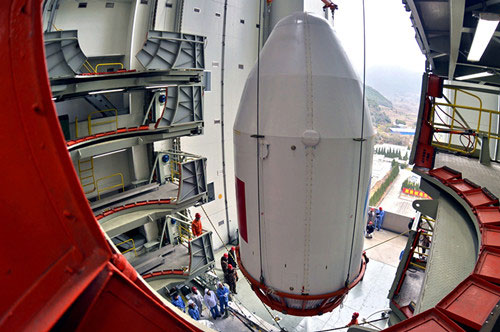 Satellite network will provide data for countries participating in the Belt and Road Initiative.

When cyclists use one of the Mobike or ofo shared bikes that seem to dot almost every major city in China, they probably don’t relate the colorful two-wheeler in front of them with a state-of-the-art spacecraft in orbit high above the Earth.

But without the navigational and positioning services that satellites provide, the entire bike-sharing sector would be no more than a pipe dream.

Similarly, without satellite-based navigation devices, tourists and motorists would find that making their way around a megacity or an unfamiliar place would be like solving a puzzle in the dark.

“Like electricity, satellite-based navigation and positioning services have become an indispensable part of people’s lives,” said Chi Jun, a senior project manager for the China Academy of Space Technology at China Aerospace Science and Technology Corp.

“If these services malfunctioned, our lives, work and even the national economy would be extensively affected.”

To ensure the stability of the services, China continues to build and improve the domestically developed Beidou Navigation Satellite System.

It is one of the nation’s largest space programs and the fourth space-based navigation system in the world, following GPS in the United States, GLONASS in Russia and the European Union’s Galileo system.

On Monday, the fifth and sixth third-generation Beidou satellites were sent into space atop a Long March 3B carrier rocket from the Xichang Satellite Launch Center in Sichuan province.

They are now working from a medium Earth orbit thousands of kilometers above the planet and will operate for at least 12 years in space, according to the China Satellite Navigation Office.

The vast space-based network is now on a fast track to achieving global coverage capability as a result of the efforts of numerous scientists, engineers, and workers, said Chi, from the space technology academy, the biggest developer of Beidou satellites.

“We were under great pressure when the research and development program for Beidou’s third-generation satellites began in 2009 because all the components of the new-generation model were new to us,” he recalled.

“We had to develop them on our own and overcome a range of technical difficulties.”

There were huge differences between the technologies used on the new model and those employed in previous generations, resulting in scientists and engineers spending a lot of time producing and verifying countless solutions, he said.

Chi added that many of the scientists also had to make time to participate in the development and production of second-generation satellites.

In the years that followed, scientists and engineers overcame a host of unprecedented technical obstacles and also designed a long-endurance, lightweight satellite platform, an inter-satellite data link system and advanced self-navigation technology.

Their achievements meant the time spent on research and development for the third-generation Beidou satellites was much shorter than for previous models, Chi said.

In November, the first two third-generation Beidou satellites were launched from the Xichang center, and in January, two more took off from the same center.

Engineers are continuing to upgrade the Long March 3 series with new capabilities that will allow them to better serve Beidou missions, according to Jiang Jie, chief designer of the Long March 3 carrier rocket family that is used to transport the satellites into orbit.

In the early years of the Beidou project, before engineers succeeded in modifying the rockets’ flight and ground-control systems, they were only able to place satellites into geostationary orbits.

Once the modifications were made, however, it became possible to add medium Earth orbits and inclined geosynchronous orbits to their launch scopes, she added.

Cen Zheng, project manager of the Long March 3 family at the China Academy of Launch Vehicle Technology, said the frequent Beidou missions that will be launched in the coming years will prompt designers and engineers to improve the rockets’ reliability and safety.

In all, scientists and engineers, plus technicians and related staff members at numerous institutes and factories, including the Xichang Satellite Launch Center, have made great contributions to the Beidou program.

Guo Xinyu, a technician at the China Academy of Space Technology who is in charge of fueling the satellites, said almost all the technicians involved have respiratory problems because undertaking such hazardous work for long periods inevitably results in exposure to toxic propellants.

However, no one in the team has expressed reluctance or complained, he added.

He noted that the two most experienced technicians, Bai Kunshun and Zhao Zhenping, still take part in fueling operations and spend several months every year at launch centers, even though they are both in their 60s.

Wu Yong, head of a team of assembly technicians at the China Academy of Launch Vehicle Technology, said all the members of his crew work many hours of overtime every year to meet the tight production schedules, and it is common for them to spend weekends or vacation time at work.

“But many have told me they are proud of their work because what they do helps the country to launch Beidou satellites, which benefits the people,” he said.

Since 2000, when the first Beidou satellite was placed in orbit, 33 satellites have been launched for the network.

In December 2012, the system began providing positioning, navigation, timing and messaging services to civilian users in China and parts of the Asia-Pacific region.

China plans to place 18 third-generation Beidou satellites in space before the end of the year.

They will work with earlier-generation models to provide services for all the nations involved in the Belt and Road Initiative, the navigation office said.

The initiative is a far-reaching infrastructure plan proposed by President Xi Jinping in 2013.

It comprises the Silk Road Economic Belt, which will link China with Europe through Central and Western Asia, and the 21st Century Maritime Silk Road, which will stretch from southern China to Southeast Asia and Africa.

The initiative will benefit about 4.4 billion people in 65 nations, according to government estimates.

At present, the Beidou system covers about 30 countries participating in the initiative, including Pakistan, Egypt and Indonesia, the navigation office noted.

Next year, and in 2020, China will place six third-generation Beidou satellites in medium Earth orbits, along with three in inclined geosynchronous satellite orbits and two to geostationary orbits.

According to plans drawn up by the China Satellite Navigation Office, the network will comprise 35 satellites before the end of 2020 – several currently in orbit will be decommissioned by then – allowing Beidou to provide global coverage.

Once the network is completed, it will provide civilian users around the world with free navigation and positioning services to an accuracy of about 10 meters.

However, paying customers will be provided with services that will be accurate to about a centimeter.