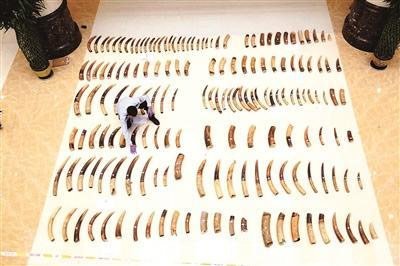 The 165 elephant tusks, worth more than 29 million yuan (4.4 million U.S. dollars), were illegally shipped to the city of Pingxiang on the China-Vietnam border on the night of Nov. 13.

They were seized by customs officers in the raid of a rural house early on Nov. 14, a spokesperson for the customs bureau in Nanning, the regional capital, said Friday.

Among the ivory pieces, the heaviest weighs 8.8 kilograms and the longest is almost one meter long.

Chinese customs has been cracking down on the smuggling of ivory, which is listed by the Convention on International Trade in Endangered Species of Wild Fauna and Flora.

In 2016, the amount of smuggled ivory seized in China fell 80 percent from previous peak years, according to the State Forestry Administration.

Chinese law stipulates that the smuggling of precious animal products worth more than 1 million yuan may lead to punishment of over 10 years imprisonment or a life sentence.

China will stop commercial processing and sales of ivory by the end of this year. Last year, it imposed a three-year ban on ivory imports in an escalated campaign against illegal trading of wild animals and plants.