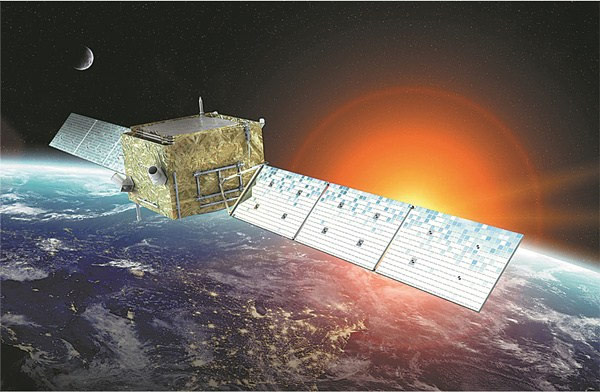 A Chinese space telescope has found a strange peak in high-energy cosmic ray electrons and positrons, which are highly energetic particles blazing across the universe at close to the speed of light.

Scientists say they think such an anomaly can help crack the secrets of dark matter, the strangest ingredient in the universe.

The strange peak was picked up by the Dark Matter Particle Explorer, nicknamed Wukong, at around 1.4 trillion electronvolts, when the flux of cosmic ray electrons and positrons suddenly rose before collapsing.

“This phenomena is unexpected because no other stellar events behave like this at such high energy,” said Fan Yizhong, deputy chief designer of Wukong’s scientific application system.

“Our best guess is it could be due to a special astrophysical event, or some weird new particles,” Fan said. “We will collect more data in this energy range to make sure this is not a fluke, so it is still too early say we found something groundbreaking.”

The discovery was part of the first published scientific results of Wukong, which was named after the Monkey King in the classic novelJourney to the West. The results were published in the science journal Nature on Thursday.

Launched in December 2015, Wukong is China’s first astronomical satellite and is tasked with finding dark matter, an invisible ingredient that makes up around 25 percent of the universe yet cannot interact with any known matter other than through gravity, said Chang Jin, the Wukong project’s chief scientist.

“Many countries have spent billions of dollars over decades to find dark matter, yet we still know very little about it because we cannot observe it directly,” he said. “However, we can observe the particles and energy released when dark matter particles interact and destroy each other.”

Previously, there were three space detectors dedicated to finding dark matter – the AMS-02 spectrometer, and the Fermi and CALET space telescopes. Wukong is the newest and most advanced member of the family, and has superior precision in the trillion electronvolt energy range, Chang said.

Since its launch, Wukong has recorded over 3.5 billion cosmic ray events, with the highest energy levels exceeding 100 trillion electronvolts, more than 10 times the highest recorded energy level created by the Large Hadron Collider, the world’s most powerful particle accelerator.

Wukong is expected to record more than 10 billion cosmic ray events during its lifetime, and it is likely to be operating well beyond its designed life span of three years, Chang said.

“In the Chinese novel, Wukong has a pair of magical eyes that can see through the devil’s disguise,” he said. “Similarly, we hope the Wukong satellite can open a new window in science discovery, and grant us the ability to see through the disguise of dark matter.”

Bai Chunli, president of the Chinese Academy of Sciences, said the discovery of dark matter is the most cutting-edge of science projects and will fundamentally change how we view the universe, such as understanding how galaxies evolve.

A galaxy is a gravitationally bound system of billions of stars rotating around its center. But the strength of gravity becomes weaker as the distance between objects grows, hence stars at the edge of the galaxy should be flying off, like raindrops flinging off a spinning umbrella.

“But this is not the case, and galaxies continue to spin like a spiral disk without disintegrating,” Bai said. “So there has to be something we cannot see that is holding the galaxy together. Dark matter is the prime suspect.”

Ed Gerstner, Nature’s scientific director for Chinese research, said the discovery is exciting despite all the uncertainties, and he will be looking forward to more results and collaboration with Chinese scientists.

“The most exciting phrase to hear in scientific discovery is not ‘Eureka, I have found it’, but rather ‘Hmm that’s weird’,” Gerstner said. This is especially true for cutting-edge physics, such as the case of the discovery of the Higgs-boson elementary particle in 2013, he added.

“Chinese scientists have a long and proud history of groundbreaking contributions to high energy particle physics … and changing the way we see the universe,” he said.