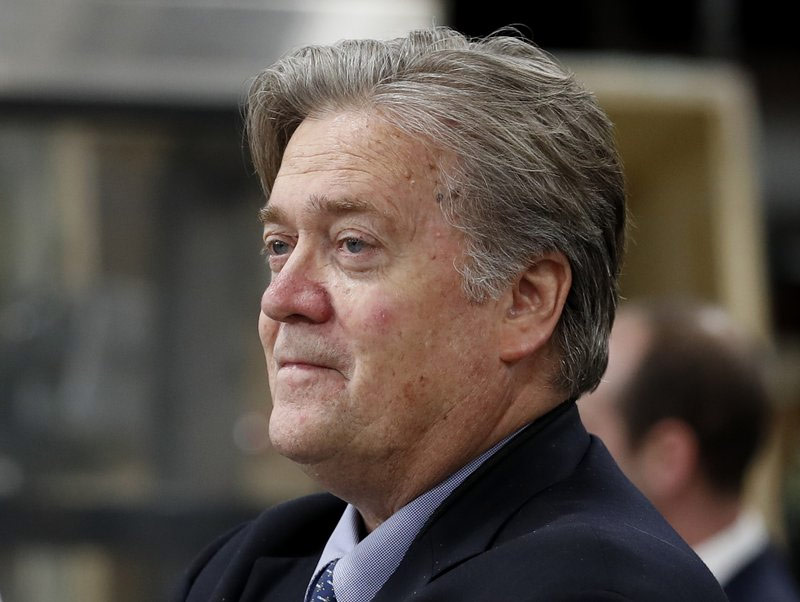 By MATTHEW PENNINGTON and PAUL WISEMAN

In an interview reflecting on some of his big-thinking projects, Bannon said the country should be “maniacally focused” on a confrontation with Beijing over who will be the global “hegemon” of the next 25 to 30 years. The former Breitbart News executive — who works steps from President Donald Trump in the West Wing — told The American Prospect that “the economic war with China is everything.”

For decades, American economists, military strategists and policymakers of all stripes have wrestled with how the United States and China, the world’s biggest and soon-to-be biggest economies, manage differences on trade and security. But no one in a position of power has adopted a strategy that entails the almost messianic zeal of Bannon’s world view.

For good reason, according to advocates of more measured approaches to dealing with China, who argue that an economic war would hurt everyone.

“Steve Bannon’s view is too simplistic and arrogant,” Seattle trade attorney William Perry declared, saying such talk “could get the U.S. in big trouble.” He said Bannon’s position is “built around the idea that the United States is the biggest market in the world and everybody has to kowtow to us.”

Bannon’s comments do reflect sentiments Trump himself has channeled on narrowing America’s vast trade deficit with China and bringing manufacturing jobs back home. They also underscore the ways in which the U.S. administration is in conflict with itself on China and other foreign policy issues.

Bannon was stunningly candid about purging rivals from the Defense and State departments who supposedly resist the tough trade line with China. And he contradicted Trump by calling his boss’ bluff on threatening to attack North Korea, saying there is no military solution to the nuclear standoff.

Bannon characterized the focus on North Korea as a “sideshow” to a more significant, U.S.-Chinese struggle for world control.

Past U.S. administrations, Republican and Democrat, have cooperated with China since it initiated market-opening reforms more than three decades ago. The Clinton administration, for example, supported China’s World Trade Organization entry in 2001.

But as China’s economic and military might has grown, hopes it would open its markets and play by WTO rules like other rising economies have receded. U.S. views have hardened.

While American consumers have benefited from cheaper Chinese-made goods, the imports have caused massive U.S. trade deficits. Last year, for instance, America’s trade gap in goods with China was $347 billion. That represented nearly half the U.S. trade deficit with the entire world.

Researchers from the Massachusetts Institute of Technology, the University of Zurich and the University of California, San Diego, found the U.S. lost 2.4 million jobs from 1999 to 2011 because of Chinese import competition. For Americans, that is the biggest concern and one Trump tapped into among blue-collar voters, at Bannon’s urging.

Of his economic war with China, Bannon said: “We have to be maniacally focused on that. If we continue to lose it, we’re five years away, I think, ten years at the most, of hitting an inflection point from which we’ll never be able to recover.”

Such doom-and-gloom talk may be getting Trump’s receptive ear. His administration has recently dusted off some little-used trade weapons, starting a process that could lead to penalties on Chinese steel and aluminum imports. On Monday, Trump announced the U.S. is investigating China for allegedly stealing American technology and intellectual property.

But Bannon is surrounded by rivals for the president’s favor, clashing with top officials such as H.R. McMaster, Trump’s national security adviser. Trump himself passed up an opportunity this week to express confidence in Bannon, who has been with Trump since before the presidential election.

Of The American Prospect interview, a White House spokeswoman on Thursday only said, “Bannon’s comments stand on their own.”

An individual outside government who met recently with Bannon described him ordering up voluminous dossiers about China from various government agencies in recent weeks, possibly to prepare for Trump’s trade action this week. Trump’s announcement drew an angry reaction from Beijing, which also pushed back on Bannon’s remarks.

“There is no winner in a trade war,” Hua told reporters in Beijing.

For years, China manipulated its currency to give its exporters an advantage over foreign competition. It demanded foreign companies turn over technology to access China’s vast market, and its firms rampantly stole the intellectual property of foreign companies. Government subsidies and cheap loans encouraged Chinese factories to overproduce steel, aluminum and other products, driving down global prices and putting U.S. and other firms out of business.

But Washington hasn’t ignored violations. The Obama administration, for instance, filed 16 WTO cases against China. The U.S. has almost completely blocked steel imports from China. The Peterson Institute for International Economics found in a report this year that more than 9 percent of Chinese imports face trade barriers in the United States, versus less than 4 percent of overall imports.

And China stopped manipulating its currency a few years ago.

“The notion that we slap some tariffs on them, and they’re going to cave — that, I’m sure, is wrong,” said David Dollar, a former U.S. Treasury and World Bank official now at the Brookings Institution.