China sentences provincial leader to life for corruption – BEIJING (AP) — A Chinese court on Friday sentenced the ex-Communist Party chief of a rust-belt province that had been hit by massive electoral fraud to life imprisonment for accepting bribes worth more than $22 million.

A court in the central city of Luoyang handed down the sentence to Wang Min, the former party leader of Liaoning province, after convicting him of bribery, corruption and negligence of duty, the official People’s Daily newspaper said.

Wang was accused of accepted money and valuables worth more than 146 million yuan ($22 million) and abusing his power when he served as a senior official in Jilin and Liaoning provinces between 2004 and 2016, state media reported.

He was also found guilty of negligence that was “responsible for serious election fraud including vote buying.”

Allegations of electoral fraud led to the removal of many of the Liaoning legislature’s nearly 600 members in September last year. The legislature nominally oversees the province, though all key decisions are made by the ruling Communist Party.

President Xi Jinping has made fighting corruption a hallmark of his administration in an effort to bolster his legitimacy. In 2016 alone, prosecutions were reportedly launched against 48 officials at the provincial level and above.

In June, the former head of China’s statistics bureau was sentenced to life in prison after being convicted of taking bribes equivalent to more than $22 million over more than two decades. 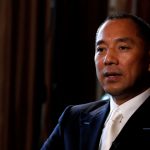