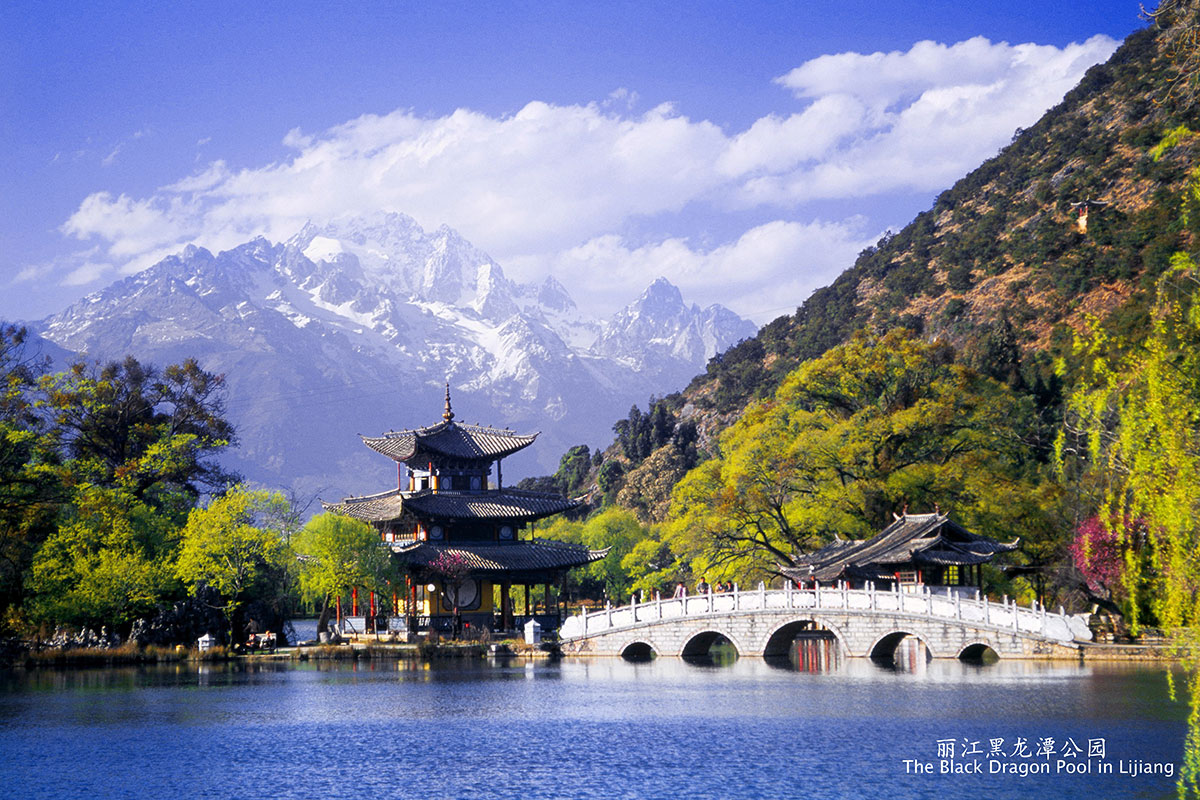 The Black Dragon Pond Park at the foot of the Xiangshan Mountain in the north of Lijiang Old Town is commonly referred to as the “Black Dragon Pond”, and the Pond got its name Yuquan (Jade Spring) because of its crystal-clear water.

Constructed in the Ming and Qing Dynasties, the ancient architectural clusters of the Park consisted of the Five Phoenix Tower, Temple of the Dragon King, the Moon-viewing Tower, the Suocui Bridge, and the Forest of Deliverance, and the Park has been listed as a key site of historic relics for national-level protection.

Geographic location: at the foot of the Elephant Mountain in the north of Lijiang Ancient City
Scenic status: it is an important cultural relic under provincial protection
Tour time: 1 ~ 2 hours

The Park of Black Dragon Pool is the hallmark of Lijiang Ancient City. Located at the foot of the Elephant Mountain in the north of the city, it is also known as Jade Spring Park for a spring with crystal-clear water. The spring pool had been granted favor twice by Qing Dynasty emperors for people’s efforts in protecting the water and their respect for god. It has been renowned far and wide since then. From the park, one gets the best view of the Jade Dragon Snow Mountain. The reflection of the Jade Dragon Snow Mountain in the spring pool is so beautiful that it is known as one of the 12 best views in Lijiang.

The front gate of the park is originally a gate of the Qing Dynasty Confucian temple; it was moved here in 1996 together with the four stone lions in front of the gate tower.

Right inside the park is the Suocui Bridge (Beauty-locking Bridge), which has a roofed corridor with benches on both sides. From there, one could have a far view of the Jade Dragon Snow Mountain and its reflection. 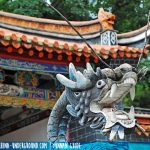 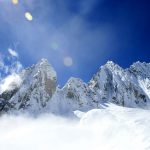 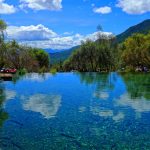 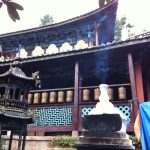 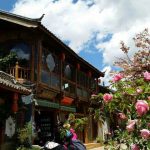 Walking farther, visitors come to Xietuoling Temple, a Ming Dynasty Monastery. As the name suggests, it was a Buddhist temple. Its gate, being the main gate of Fuguo Temple, a former Lamaist Temple in Lijiang, was moved here in 1974. The world famous Research Institute of Dongba Culture is nearby.

Deyuelou Pavilion is located in the center of the Black Dragon Pool. It was built in the Qing dynasty (1876) in the style of Suzhou pavilions. Three-storied, conical roofed and with eaves upturned, this pavilion is grand in structure and colorful in decoration. On the horizontal board of the pavilion is the name of the pavilion written by Guo Moro, a famous Chinese poet. He also dedicated two couplets to the pavilion. One of the couplets is a clever rearrangement of Chairman Mao’s Poems while the other is Mr. Guo’s composition, both describing the beautiful landscape of the park.

At the north end of the Black Dragon Pool, on an open ground, lies the Five Phoenix Pavilion, an ancient architecture worth visiting. The Five Phoenix Pavilion was originally called “Fayun Pavilion” and located in Fuguo Temple. A Tripitaka granted by Emperor Xizong of the Ming Dynasty used to be stored in this pavilion. The pavilion, a typical example of the architecture of the Ming and Qing Dynasties, was first built in the Wanli Period of the Ming Dyansty and moved into the Black Dragon Pool in Lijiang City in 1979. It is 20 meters in height and the roof is pointed with three storied eaves under it. To each direction, eaves upturn at each corner and each story, thus forming 24 flying eaves. From any point, the pavilion looks like a phoenix spreading her wings and ready to fly. So it got the name. It is on the list of important cultural relics under provincial protection.

Outside the Five Phoenix Pavilion, to the north, is the Dongba Dance Square. Further north is the Museum of Dongba Culture, which was built in 1993. Here Dongba Culture of Naxi people was exhibited in many forms.