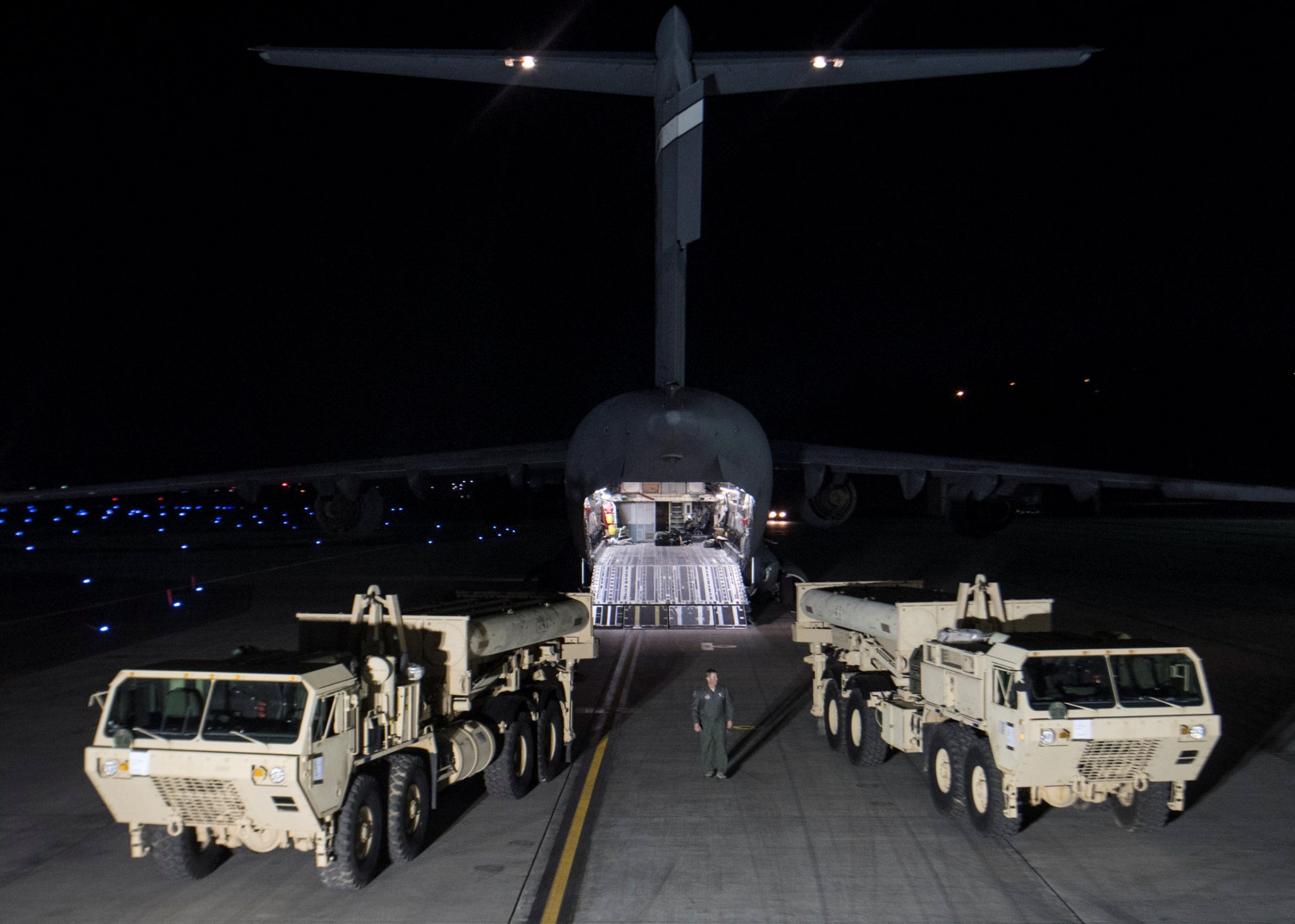 The move by the U.S. military is likely to deepen the brewing conflict between South Korea and China, which says the THAAD deployment destroys the regional security balance.

The four ballistic missiles fired by North Korea landed in the sea off Japan’s northwest, angering Seoul and Tokyo, days after Pyongyang promised retaliation over the military drills that it sees as preparation for war.

U.S. President Donald Trump and Japanese Prime Minister Shinzo Abe discussed the launches by the nuclear-armed North during a phone call on Tuesday.

“Japan and the U.S. confirmed that the latest North Korean missile launches were clearly against U.N. resolutions and a clear provocation against the regional and international community,” Abe told reporters. “(North Korea’s) threat has entered a new phase.”

Reclusive North Korea, which has carried out a series of nuclear and missile tests in defiance of United Nations resolutions, issued a typically robust statement on state news agency KCNA after the missile launches.

“In the hearts of artillerymen … there was burning desire to mercilessly retaliate against the warmongers going ahead with their joint war exercises,” KCNA said.

It said Kim ordered the Korean People’s Army’s Strategic Force “to keep highly alert as required by the grim situation in which an actual war may break out any time, and get fully ready to promptly move, take positions and strike so that it can open fire to annihilate the enemies”.

The missiles North Korea fired on Monday were unlikely to have been intercontinental ballistic missiles (ICBMs), South Korea said, which can reach the United States. They flew on average 1,000 km (620 miles) and reached an altitude of 260 km (160 miles).

South Korean military and intelligence officials said on Tuesday the four North Korean missiles appeared to be an upgraded version of the Scud type – Extended-Range Scud.

North Korea is mired in a separate diplomatic row with Malaysia over the killing of Kim’s estranged half-brother at Kuala Lumpur airport last month. [L5N1GK0AA]

The two countries have expelled each other’s ambassador from their capitals and on Tuesday announced tit-for-tat bans on departures of each other’s nationals, sharply escalating tensions between two countries that, until the killing of Kim Jong Nam, had maintained rare close ties.

The United States and Japan have requested a United Nations Security Council meeting on the latest North Korean missile launches, which will likely be scheduled for Wednesday, diplomats said.

The planned installation of the U.S. anti-missile defence system has led to a diplomatic standoff between China and South Korea.

Chinese authorities have closed nearly two dozen retail stores of South Korea’s Lotte Group, which approved a land swap with the country’s military last week to allow it to install the system.

“The consequences of this are on the shoulders of the United States and South Korea. We again strongly urge the relevant sides to stop the deployment process and not keep going down the wrong path,” he added.

China’s state-run Global Times warned the possibility of war on the Korean peninsula was growing because of the U.S.-South Korean military drills and the North Korean missile launches.

“The Chinese public is angry that Pyongyang’s nuclear programme has provided an excuse for Seoul to deploy THAAD,” the tabloid said in an editorial.

“Pyongyang blindly believes nuclear weapons are the greatest guarantee of its national security regardless that the reality is the opposite,” it said.China objects to the THAAD deployment, saying its territory is the target of the system’s far-reaching radar. South Korea and the United States have said the missile system is aimed only at curbing North Korean provocations.

The Yonhap news agency said the THAAD deployment could be completed in one or two months.

By James Pearson and Ju-min Park

(For graphic on North Korea’s nuclear and missile threats click on http://tmsnrt.rs/2n0gd92)