‘Witness to History’ is the memoir of Paul Hoffmann, an 18-year-old Viennese man who arrived in Shanghai in 1938 to escape the barbarities of the Nazi regime, along with numerous other compatriots. Paul Hoffmann witnessed and experienced firsthand the arrival of Nazism in Europe, the Japanese invasion of China, and the following Communist victory in 1949. Jean Hoffmann Lewanda edited her father’s memoir, which was recently published as “Witness to History” by Earnshaw Books.

Why did your father decide to tell his story? Where did he start?

When my Dad was about fifteen years old, he came across a family history that was told in the form of anecdotes about colorful ancestors. After he retired in 1986, he thought he would continue the tradition. He related some of the stories that he remembered; the original document was lost during World War II. Then he shared what he knew about his grandparents, who were born in the 1850s and 1860s, before digging deeper into his parents’ generation and his own life.

Related articles: The Photographic Work Of Arthur Rothstein In China: Signal Corps, The Great Famine, The Jewish Refugees in Shanghai

In 1938, your father arrived in China. What were his first impressions of the country? What were the main difficulties he encountered?

“Commotion, noise, strange people and an indecipherable language,” was the way Dad described his first impression of Shanghai. He had never been more than 200 miles from Vienna, having been to Hungary for vacations. The streets from the harbor to Hongkew were lined with bombed-out houses. The first concern was housing. The first night he shared a room that did not have indoor plumbing on Chusan Road with a married couple. He was fortunate in that he had some contacts who then allowed him to sleep on a mattress on the floor in their house in the French Concession until he was able to find another place with two other young men.

How were foreigners received by the local population?

Actually, quite well, especially after what they left behind. The refugees were met by the Refugee Committee that had been set up by the affluent Sephardic Jews, the Sassoons, and the Khadooris, who had established themselves in China in the 1800s as traders. They were prepared to meet the basic needs of the refugees.

The Chinese population was very accepting of the new arrivals. There was no antisemitism. Relationships developed at all levels of society. Despite limited communication, the Chinese and the Jews lived side-by-side in harmony, fulfilling each other’s needs.

What was the cultural atmosphere of the Jewish community in Shanghai before the Japanese attack on Pearl Harbor?

The Sephardic community had built synagogues and schools. There was a Jewish Social Club and Zionist organizations. There were Russian Jews who had fled the Bolshevik Revolution and the pogroms and had settled in Shanghai, as well as Harbin and Tseintsin, who had their own synagogues. People were not only free to participate in religious activities, they were active in the arts, sports, education, and business.

The book is full of personal episodes from your father’s life. What were the events that most struck you?

That’s a difficult question since there were so many moving moments. I might start with all the events that are examples of inhumanity. I cannot comprehend how people can be neighbors one day and the very next day they are no longer welcome in their community and have lost all their human rights. Then there were all the physical challenges related to sanitation and disease. And last but not least, the separation and loss of family and friends and all the uncertainty that went along with these situations.

What was the status of Jewish people in China in 1939?

For all intents and purposes, they were stateless. The Russian Jews had left what became the Soviet Union without documentation. The Jews from Germany and Austria were issued passports by the Third Reich that were solely for the purpose of leaving those countries. Once they left, they were stateless. The Sephardic Jews were either British citizens or under British protection.

How do national events reflect on his personal history?

I believe that my father’s integration of political and national events, and how they are reflected in his personal history, as well as the community at large, is the strength of this memoir. He never fails to inform about the impact of each change in government and leadership had on everyone, whether it was leaving Vienna, or living in the Hongkew ghetto during the Japanese occupation, or deciding to remain in Shanghai after the Communist takeover. Dad observed the choices and paths that became available and repeatedly said how fortunate he was that, for the most part, the choices he made led to positive outcomes for himself and his immediate family. He knew there were no easy choices and carried a sadness for those who suffered a much worse fate. He never referred to himself as a “survivor” feeling that word was reserved for those who had been in the camps and had lost so much more than he.

In 1949, Chairman Mao took control of mainland China. How did your father’s life change?

Dad’s life changed dramatically after the Communist takeover. From 1946-1949 Shanghai reverted to its pre-war self. Americans who had been repatriated returned and both business and social life resumed. Dad was working for an influential American law firm with a prominent clientele. His earnings allowed him to provide for his family in the manner they were used to in Vienna prior to the Anschluss. After WWII the Jewish community was actively pursuing options for emigration and these efforts intensified once Mao came into power. American businessmen risked being jailed if they did not make a timely exit. Dad’s Austrian passport had been reinstated and it was safer for him to stay in Shanghai to settle the affairs of the firm than it was for his American boss. He agreed to stay behind with a promise that he and my Mom would be supported and granted entry into the United States as soon as affairs were settled. Little did he know how difficult and dangerous life would become over the next couple of years as the property was confiscated and strict government regulation and surveillance were imposed.

Are there still traces of the Jewish community’s cultural presence and influence in Shanghai?

Yes. The Ohel Moshe Synagogue, where my parents were married, is now the Shanghai Refugees Museum. I understand that it has doubled in size in the last two years.

A number of other buildings associated with the Jewish community still exist. The Ohel Rachel Synagogue, built by the Sassoon family, is sometimes used for services by the Chabad, an orthodox religious group that has centers worldwide. Other buildings have been repurposed such as the Shanghai Jewish School and the Jewish Club, which now serves as a music academy. The Jewish Hospital is now an eye hospital.

Have you visited the neighborhood where your family lived in Shanghai? What feelings did you have?

I visited Shanghai in September of 2019 with my late husband and my daughter. I arranged a tour of all the places that I knew about including Hongkew, the French Concession, the buildings mentioned above, as well as Hamilton House where my Dad worked and the Park Hotel where my parents had their honeymoon.

I think the thing that was so striking to me was the contrasts. Shanghai is such a vibrant modern city yet apartments in Hongkew still lack indoor plumbing. And with all the modern advancements the buildings themselves still looked the way they did 70 years ago, I was very moved by being able to be in the very same space where my parents had been. 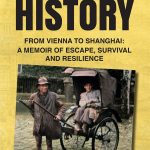 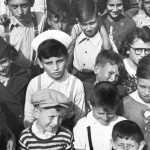 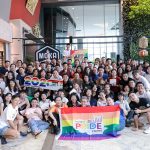 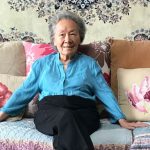