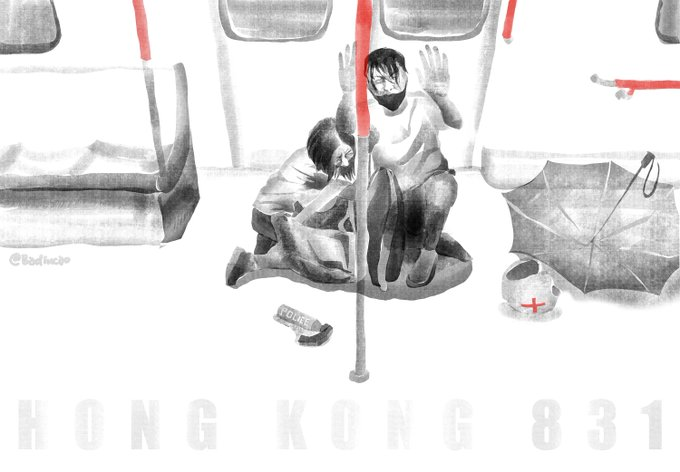 After another day marked by police violence that loaded and beaten up activists and ordinary citizens in the Hong Kong subway, today is the day of protests at Hong Kong airport.

In August, protesters shut down the airport for several days, where they blocked travellers from reaching their flights.

On Saturday protesters built a pyre across a road outside the police headquarters in the commercial district of Wan Chai, and set it on fire.

Outside the airport protesters dismantled fences and constructed barricades.

#NOW – 1445 – stand off at arrival hall B of the #hkairport. #antielab protesters have their umbrellas open, police with their batons out. pic.twitter.com/NF4gxK9E6o

Others stationed at a bus terminus on the ground floor of the airport, chanting: “Liberate Hong Kong, revolution now!”

After the inevitable arrival of the anti-riot agents, a group of protesters occupied a highway leading to the airport.

In the meantime, the authorities have stopped the rail link service with the city, and many buses have been suspended.

The occupation of the airport comes a day after the violence of the agents who attacked helpless citizens and protesters in the trains and the corridors of the underground, using batons and deploying pepper spray.

Hong Kong is currently facing its most acute political crisis, caused by the controversial extradition bill in China, a bill that has been interpreted as a further erosion of the independence of the former British colony, sanctioned and regulated independence from the Basic Law, the constitution of Hong Kong.