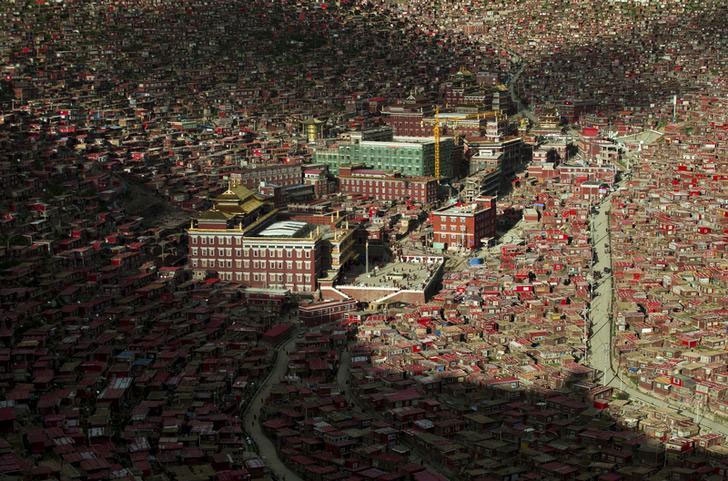 According to an official document obtained by Human Rights Watch, some 200 Communist Party cadres and lay officials are taking over all management, finances, security, admissions, and even the choice of textbooks at the center, following demolitions and expulsions in 2017.

“The new government controls over Larung Gar fly in the face of Party claims that China respects constitutionally protected religious beliefs,” said Sophie Richardson, China director at Human Rights Watch. “The micromanagement of the Tibetan monastery encroaches on religious freedom and is likely to fuel resentment against Beijing.”

The brochure emphasizes increased security and heightened control of the monks and nuns, calling for rigid limits on the numbers allowed to stay there, and for ongoing surveillance of the monastery population through the establishment of a “grid management” system throughout the settlement. It also states that all residents and visitors will be subjected to “real-name registration,” with monks required to have red tags or labels (Tibetan: byang bu), while nuns will have yellow labels, and lay devotees will have green ones.

Larung Gar was the largest center of Buddhist monasticism in Tibetan Autonomous Prefecture, in Sichuan, if not the world, until an eight-month program of expulsions and demolitions, which ended in April 2017 after reducing the number of residents to around 5,000. It had previously been run by Tibetan monks and nuns selected by senior members of the monastery. The government’s takeover of the administration – described in the official document as “standardization” – could have far more significant impact than the demolitions and expulsions. The actions led a group of experts from the United Nations in November 2016 to ask the Chinese government to provide information about the legal grounds for the expulsions.

The new document is an undated, four-page brochure printed in color in Chinese and Tibetan and apparently intended for public distribution. It ends with a quotation from Liu Chengming, Party secretary of Kandze prefecture, a supposedly autonomous area of Sichuan province that includes Larung Gar. The document appears to have been issued either by his office or by officials running Larung Gar.

The original order for the demolitions, which Human Rights Watch obtained and published in June 2016, indicated that in the future three-fifths of the members of the main management committee at Larung Gar would be lay officials instead of monks. That plan was put into practice last August when local authorities announced the names of six top lay officials who had been given positions within Larung Gar’s two main management committees. All of them, including the deputy police chief of Kandze prefecture, are Communist Party cadres and are therefore required to be atheists.

The new document shows that scores of other cadres are to be installed not just in the management committee, but at every level and in each section of the monastic settlement. They will hold nearly half of the positions on most committees and in most offices, and in most cases will occupy the top positions. The prefectural deputy police chief will be party secretary and principal at the Larung Gar Institute, three of his seven deputy principals will be cadres, and the six “sub-area management units” (Chinese: guanli zu) that supervise the monks at the institute will each be headed by a cadre rather than a monk.

According to the brochure, new committees will also be set up to handle propaganda, “internal security,” finances, education, and students within the institute. Half of the people running these committees will be cadres, 97 of whom will be stationed in the institute. Monastery sources have confirmed to Human Rights Watch that at least the same number will be stationed within the other section of the settlement, which is now officially designated as the “monastery.” These sources said that a large building has already been constructed to house the cadres.

“The administrative takeover of Larung Gar by Party officials shows that the government’s aim was not merely to reduce numbers at the settlement,” Richardson said. “Chinese authorities are also imposing pervasive control and surveillance over every level of activity within religious communities.”

According to the brochure, 40 percent of teaching at Larung Gar Buddhist Institute must now consist of classes in politics and other non-religious subjects. The primary criterion for accepting students will be whether they “have a firm political stand, accepting the Great Motherland, the Chinese [Chinese: Zhonghua] people, Chinese culture, the Chinese Communist Party and socialism with Chinese characteristics.” The objectives of study will include to “honor and support the Chinese Communist Party and the socialist system” and to train monks who “defend the unification of the Motherland, uphold nationality unity and patriotic religion and abide by their vows.”

Only residents of Sichuan province will be allowed to apply, other than in exceptional cases, eliminating monks and nuns from other Tibetan areas – which had been a distinguishing mark of Larung Gar. Since 2008, Chinese authorities have imposed similar limits on other major Tibetan monasteries, banning them from accepting monks and nuns from outside the local area. The document also indicates that steps will be taken to stop those who have been expelled from returning to the settlement.

The scale of the Communist Party’s intervention at Larung Gar is unprecedented, Human Rights Watch said. Since October 2011 permanent teams of cadres have been stationed in all monasteries in the Tibet Autonomous Region, the central Tibetan area far to the west of Larung Gar, where they have taken over the management committee of each monastery. There have been reports of similar takeovers of some monasteries in eastern Tibetan areas. But none are known to have consisted of such large teams of cadres, or to have included cadres even at the lowest levels of monastery management.

The changes at Larung Gar are in line with current religion policy, which emphasizes ensuring political stability in monasteries by intensifying official management. It also rewards political compliance by monks and nuns with public praise, titles such as “model patriotic monk,” and other material or social benefits. The document aims to make the study of Buddhism “standardized, law-abiding and modern,” a reference to a new, centralized system for managing religious training, textbooks, and curricular content maintained mainly through a network of higher studies institutes being constructed throughout China to retrain Buddhist monks.

The scheme appears designed to micromanage religious institutions rather than close them down and to produce a new generation of Buddhist teachers trained equally in religious doctrine and state ideology in order to “adapt Tibetan Buddhism to socialist society.”

“The Chinese government’s latest inroads at Larung Gar show a pernicious intent to exercise extreme control over religious practice,” Richardson said. “This is an immediate threat to the religious freedom of all Tibetans, but a long-term threat to all Chinese.”

Leftover Women: The Resurgence of Gender Inequality in China