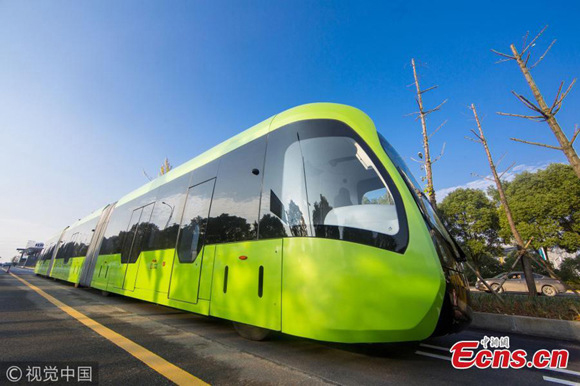 The world’s first railless train hit the road on Monday afternoon in Zhuzhou City, central China’s Hunan Province, and its developer forecasts that autonomous driving of the train will be possible by 2020.

The 32-meter-long train, carrying rail experts and journalists from home and abroad, appeared on Shennong Avenue in Zhuzhou at 4:30 in the afternoon.

The train is part of the intelligent rail express system, called Autonomous Rail Rapid Transit (ART). It has been independently developed by the CRRC Zhuzhou Institute Co.

The latest success marks the completion of the 3.1-kilometer phase-one demonstration line of the world’s first ART system, which will soon be put into trial run. The first three trains are set to go into operation around the Spring Festival in the coming year.

According to Feng Jianghua, chief engineer at the institute, the train runs on rubber tires along designated virtual tracks rather than rails. It is equipped with sensors that can detect the virtual tracks and respond to instructions sent by the central control unit, or the central “brains.”

The train may consist of three to five carriages depending on actual transport needs and hold 300 to 500 passengers, and can run at a speed of up to 70 kilometers per hour. It is powered by electricity, and a 10-minute charge enables it to run 25 kilometers.

As the train doesn’t rely on steel rails, a transit line can be built in a year and put into use soon afterwards, while construction costs are also significantly lower compared to traditional trams, Feng said.

Moreover, the train has active safety protection systems. It can obtain information of potential dangers originating from itself and its surroundings and send alerts. Under company plans, semi-autonomous driving of the train is set to be achieved by 2019, while full autonomous driving will likely be attained by 2020.

After the innovative product and model becomes mature, the company will also promote it on overseas markets, he said.