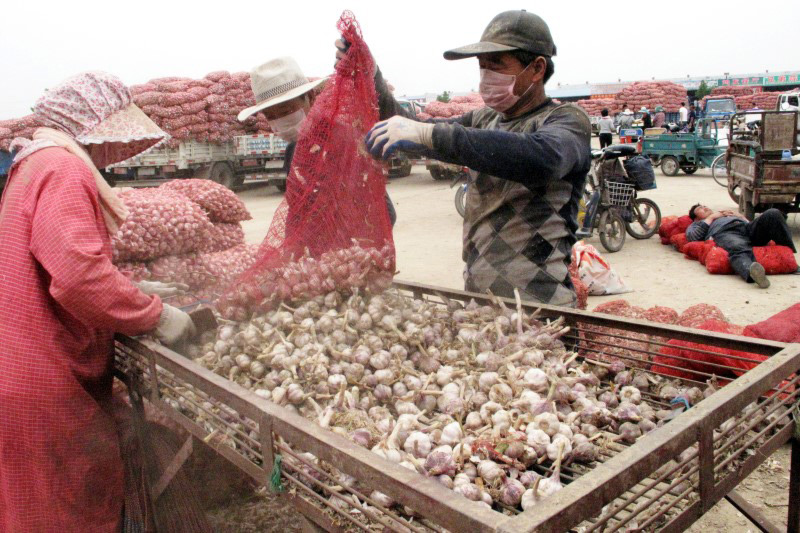 JINXIANG, China (Reuters) – Yang Fei doubled his money last year buying and selling in the unofficial garlic capital of the world. He did pretty well the year before, too, and the year before that. One of a few dozen garlic agents in Jinxiang, in China’s eastern Shandong province, 34-year-old Yang is at the centre of a trade that has attracted a small group of retail investors, mainly wealthy businessmen, seeking a surer bet than China’s volatile stock and real estate markets.    When prices are low around the spring harvest, investors buy as much of the crop as they can, put it into store, and release it on to the market when prices rise later in the year.

“Manipulating the garlic market and hyping the price is pretty simple compared to the stock market and real estate. Many of my clients have stocked tens of thousands of tonnes of garlic and don’t sell it until the price rises,” another agent, Liu Yunfei, told Reuters. Yang’s profits and those of his dozen or so clients ballooned to 7 million yuan (£758,182) last year, when the price of garlic rose to 10.6 yuan ($1.62) per kilogram.

“For the last three years, our investors have made money, we made a 100 percent profit last year,” said Yang, who has built five warehouses for garlic storage and plans another four.

This year, though, may be different. The one-way bet on garlic has lured many new investors, driving prices up to a record 13.4 yuan/kg in March, much earlier than usual. Also, frosts in China at the turn of the year hit plantings and yields, and that could squeeze margins when the investors’ stored garlic comes on to the market later. Agents said there were more investors this year, and they were spending more to buy up the garlic crop.

“This year, garlic prices are especially high,” said an agent named Yan Jianhua. “A lot of people have been looking for me. I know one person from Guangdong who wants to store around 5,000 tonnes. Last year, he stored less than 1,000 tonnes.”

With a population of around 640,000 and no previous claim to fame other than proximity to the provincial capital, Jinxiang has boomed.

It produced 1.69 million tonnes of garlic last year, around 7 percent of China’s total – and more than the whole of South Korea, the world’s third-largest producer. China’s annual crop of around 25 million tonnes dominates the global market. Garlic fields stretch out around Jinxiang, and at harvest time the air is filled with dust kicked up by trucks ferrying the crop to market and storage. The town also grows onions and hot peppers. As production around Jinxiang has doubled in a decade, the ‘garlic economy’ has sprouted new villas, auto dealerships and modern retail space.

“Garlic has made Jinxiang richer in the last two years,” said Su Xiuling, a local grower who makes some extra money by peeling garlic at the market once the crop is in. “There’s a huge change. Our roads are wider … and even farmers now build bigger homes.”

Garlic is a staple in Asia’s diet, used in everything from the ubiquitous monosodium glutamate (MSG) to desserts. Believed to have medicinal healing powers, it’s even added to foot salve. It’s easy to grow, harvest, transport and store. Modern coldstores – some bigger than a football pitch – can keep it fresh for up to two years, giving investors a longer window to sell into. Zheng Xiang from Chengdu in southwestern Sichuan – a more than 2-hour flight away – is one of those investors who converge on Jinxiang each year to meet their agents, inspect the crop and check on prices.

“I came to inspect the market and see how big the harvest is and whether the price has increased,” Zheng said over dinner, with heaps of stir-fried garlic.

“Isn’t everybody switching from stocks to agriculture commodities now? It’s the trend. Speculating with garlic is similar to stocks, but (physical) garlic is not as unreliable as futures (trading),” he said. But not everyone gets to share in the spoils. Garlic farmers see little of the profits once their crops are lifted. They typically sell their garlic for around 4.4 yuan/kg, according to local official media.

China’s garlic market is difficult to track as there is no official data or clarity on acreage and no centralised pricing. That can exacerbate wild price swings as in some of China’s other nascent, casino-like futures markets. And the scale of production in places like Jinxiang is felt thousands of miles from China among rival growers who accuse a hands-off government of failing to regulate the crop or control the “dumping” of cheap exports.

“The Jinxiang government is paying close attention to garlic prices, but isn’t regulating and controlling the market. It is trying to guide planting and trade,” said a local commerce official who gave only his surname, Li.

Yu Li, a spokesperson, said the Dalian Commodity Exchange has no plans to add garlic futures, and pays little attention to the crop. As more money pours in, next year’s garlic acreage is expected to increase again, potentially squeezing margins, but not by enough to deter investors.    “You can buy garlic pretty much any year and still make money,” said Wang Xiaoying, an investor who owns four Jinxiang warehouses.

“If you invest a million, you’ll make a million, it’s that simple,” she says. 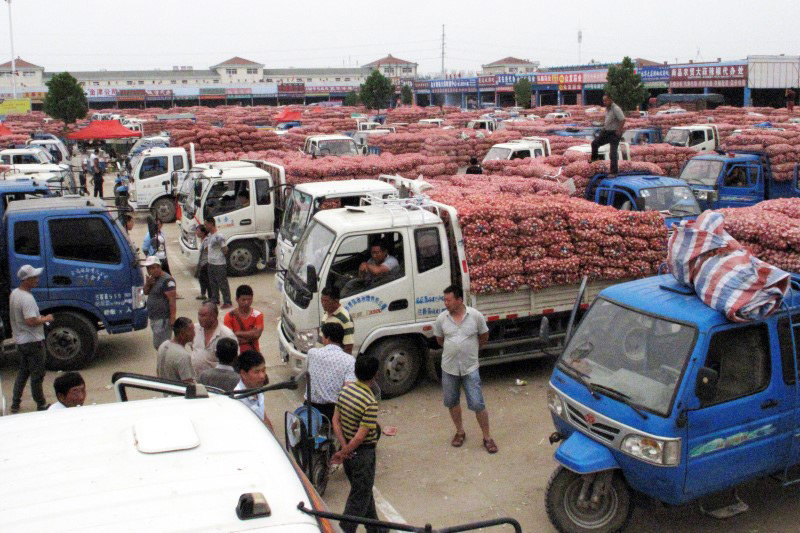 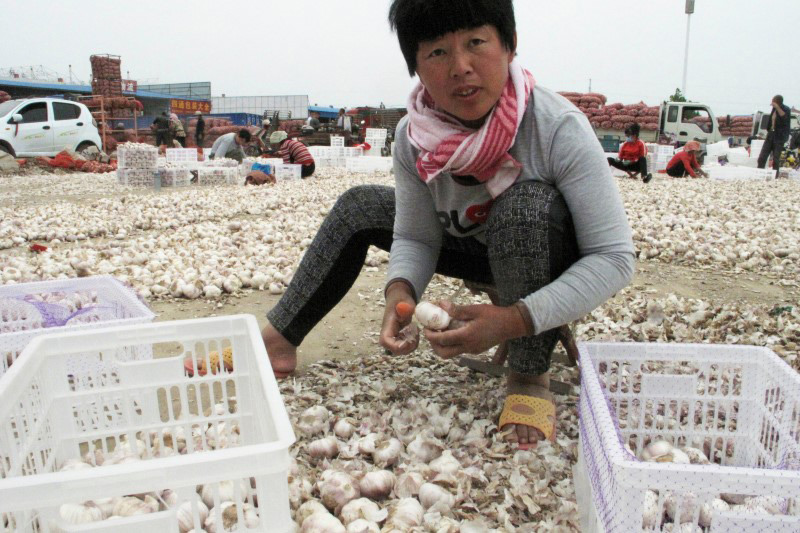 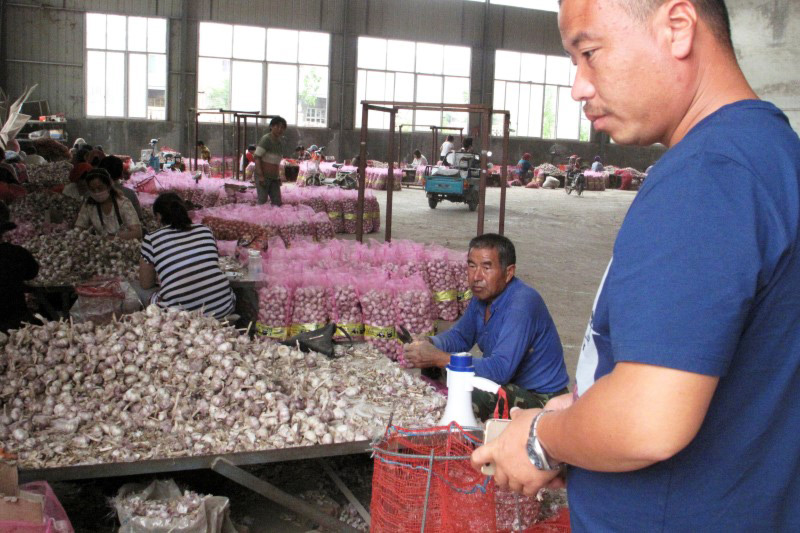 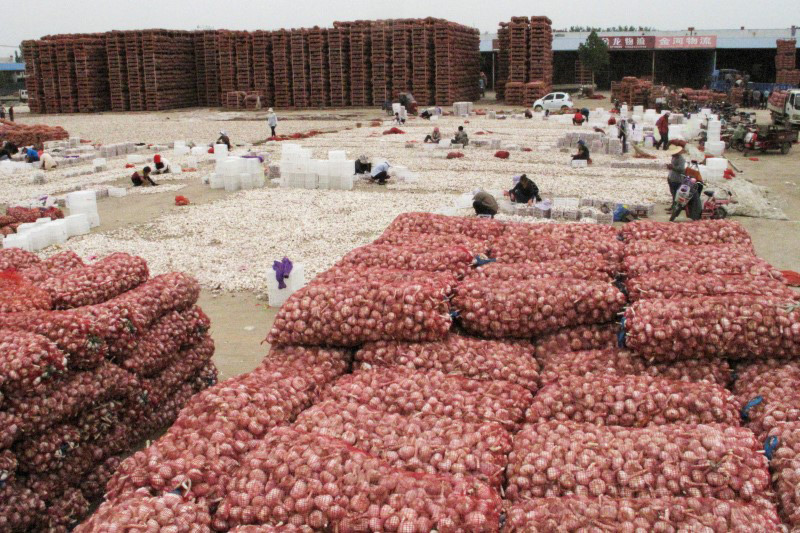