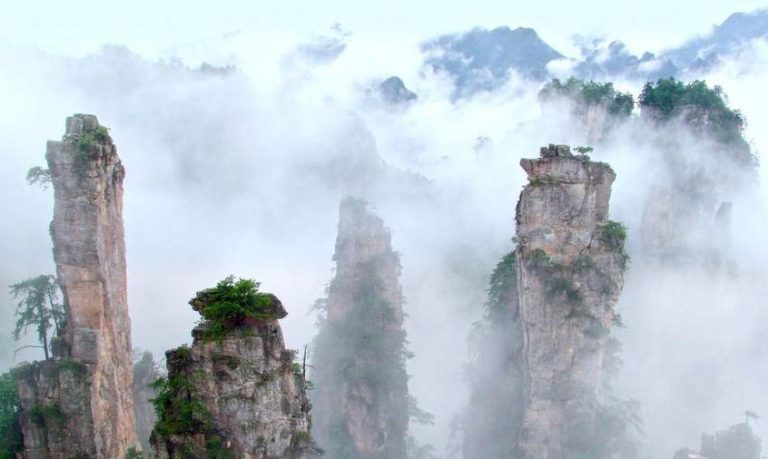 Zhangjiajie National Forest Park is one of the most peculiar national forest parks in China.

It’s located in Zhangjiajie City in northern Hunan Province in the People’s Republic of China. It is one of several national parks within the Wulingyuan Scenic Area. [Wikipedia]

In ancient times, Zhangjiajie was regarded as remote and inaccessible. The history of Zhangjiajie can be traced back to the Neolithic Age when it was still named “Dayong”. The first human traces in this area have been registered about 100,000 years ago. Like other places in China, a legend has been developed by ancient people.

It said that Zhang Liang-a famed strategist of the Western Han Dynasty (206 BC-24 AD), lived here after leaving the imperial court. He lived in fear he would be killed by Liu Bang, the first emperor of the Han Dynasty who had ordered some of his subjects executed out of suspicion they might rebel against him. Zhang found Qingyan (now Zhangjiajie) Mountain is an ideal refuge due to its haunting beauty and tranquility. He became a hermit. It is said he planted seven ginkgo trees here. He was buried below Qingyan (now Zhangjiajie) Mountain. Zhang’s descendants also are believed to have lived here, which is how the name Zhangjiajie originated. Zhang refers to Zhang Liang’s surname, while Jia means family and Jie represents homeland or border. [Zhangjiajie Tourism]

The most notable geographic features of the park are the pillar-like formations that are seen throughout the park. Although resembling karst terrain, this area is not underlain by limestones and is not the product of chemical dissolution, which is characteristic of limestone karst. They are the result of many years of physical, rather than chemical, erosion.

Much of the weathering which forms these pillars is the result of expanding ice in the winter and the plants which grow on them. The weather is moist year-round, and as a result, the foliage is very dense. The weathered material is carried away primarily by streams. These formations are a distinct hallmark of the Chinese landscape and can be found in many ancient Chinese paintings.  [Wikipedia]

According to park officials, photographs from Zhangjiajie inspired the floating Hallelujah Mountains seen in the movie Avatar.