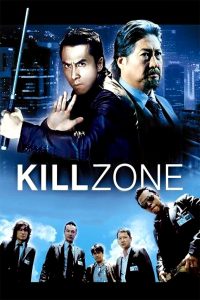 Chan, an articulate senior detective nearing the end of his career, is taking care of the daughter of a witness killed by ruthless crime lord Po. Martial arts expert Ma is set to take over as head of the crime unit, replacing Chan who wants an early retirement.

Chan, an articulate senior detective nearing the end of his career, is taking care of the daughter of a witness killed by ruthless crime lord Po. Martial arts expert Ma is set to take over as head of the crime unit, replacing Chan who wants an early retirement.

SPL: Sha Po Lang (Chinese: 殺破狼, released in the United States as Kill Zone) is a 2005 Hong Kong action film written and directed by Wilson Yip, and starring Donnie Yen, Sammo Hung and Simon Yam. The film was released in Hong Kong on 18 November 2005.
Yam portrays a retiring police detective who resorts to the use of questionable methods in order to catch Wong Po (Hung), a ruthless triad boss.

The title Sha Po Lang refers to three words derived from Chinese astrology that each represent a different star capable of good or evil depending on their position in the heavens.

The movie is set before 1997, prior to the return of Hong Kong to the People’s Republic of China. Chan Kwok-chung (Simon Yam), a Hong Kong police inspector, has dedicated his career to putting Wong Po (Sammo Hung), a notorious triad boss, behind bars. While escorting a witness with damning evidence of Wong’s wrongdoings to court, Chan’s car is rammed by another car driven by Jack (Wu Jing), a ruthless assassin. Jack proceeds to kill the wounded witness and his wife, but spares their young daughter. Chan survives with a piece of glass stuck in his head. After the glass is removed, the doctor informs Chan of a tumor in his brain that will soon kill him. Chan becomes even more determined to bring down Wong Po, using any means necessary.
Three years later, Ma Kwun (Donnie Yen), a police officer from another precinct, is assigned to replace Chan, who is going to retire soon. Ma will lead Chan’s team, composed of Wah, Sum and Lok. The three men are very protective of Chan, who has since adopted the slain witness’ daughter.
An electronics shop owner brings to the police station a video tape of Wong Po torturing an undercover agent. In the video, Wong hits the agent repeatedly with a golf club, then one of his men finishes him off. Chan and his colleagues decide to alter the tape, intimidate the shop owner into accusing Wong Po of being the murderer, and eliminate the real killer. Ma, who once beat up a drug trafficker so badly that the latter has become mentally handicapped, has vowed to abstain from using questionable means in his career. He is upset when he sees Chan and his colleagues resorting to use underhanded means to frame Wong Po for murder. He witnesses Chan’s team murdering the henchman that killed the undercover agent, and confronts the four of them, resulting in a brief fight. Despite their disagreements, Ma still assists Chan and the team later in the arrest of Wong Po.
The group receives a message warning them against leaving the police station that night. Ignoring the threat, Lok goes to buy a gun to serve as Wong Po’s “murder weapon”, but is trapped in an enclosed area and ends up getting killed by a knife wielding Jack. Later that night, Jack sneaks up on Wah and Sum and stabs them to death. Ma rushes to save them but arrives too late. Before dying, Wah confesses to Ma that he, Sum and Lok had stolen money from Wong Po (when they busted one of Wong’s drug operations earlier) to help Chan raise his adopted daughter, and were targeted for retaliation by Wong. A copy of the original video tape is sent to Chan’s superior, Cheung Chun-fei. Seeing that Chan had tampered with evidence to frame Wong Po, Cheung releases Wong and proceeds to arrest Chan. An elderly policeman called Uncle Ba helps Chan avoid arrest.
Chan goes to Wong Po’s office with the stolen money. He shoots a few henchmen but is eventually overpowered and disarmed by Jack. At the station, Ma has a heated argument with Cheung over the handling of the case. Furious, he turns in his badge and gun. He receives a call from Wong Po, who tells him that he has taken Chan captive.
Ma then heads to Wong Po’s office and encounters Jack in a back alley. After an intense battle, Jack wrestles Ma’s baton away from him, but Ma manages to eviscerate Jack with his own knife. In Wong Po’s office, he fights Wong and seemingly kills the crime lord when he backdrops the latter onto a tall display of glasses and bottles. Ma sits down at the bar and starts to pour himself a drink. However, Wong suddenly gets up and throws Ma out of the window. Ma lands on the car carrying Wong’s wife and baby son, caving in the roof. All three are killed instantly. Wong gazes down at Ma’s body and recognizes the car underneath. He slumps down and starts sobbing, broken with grief.
In the final scene, Chan and his adopted daughter are seen on the beach, with the girl playing near the shore. Chan finally succumbs to his tumour and dies. [Wikipedia]