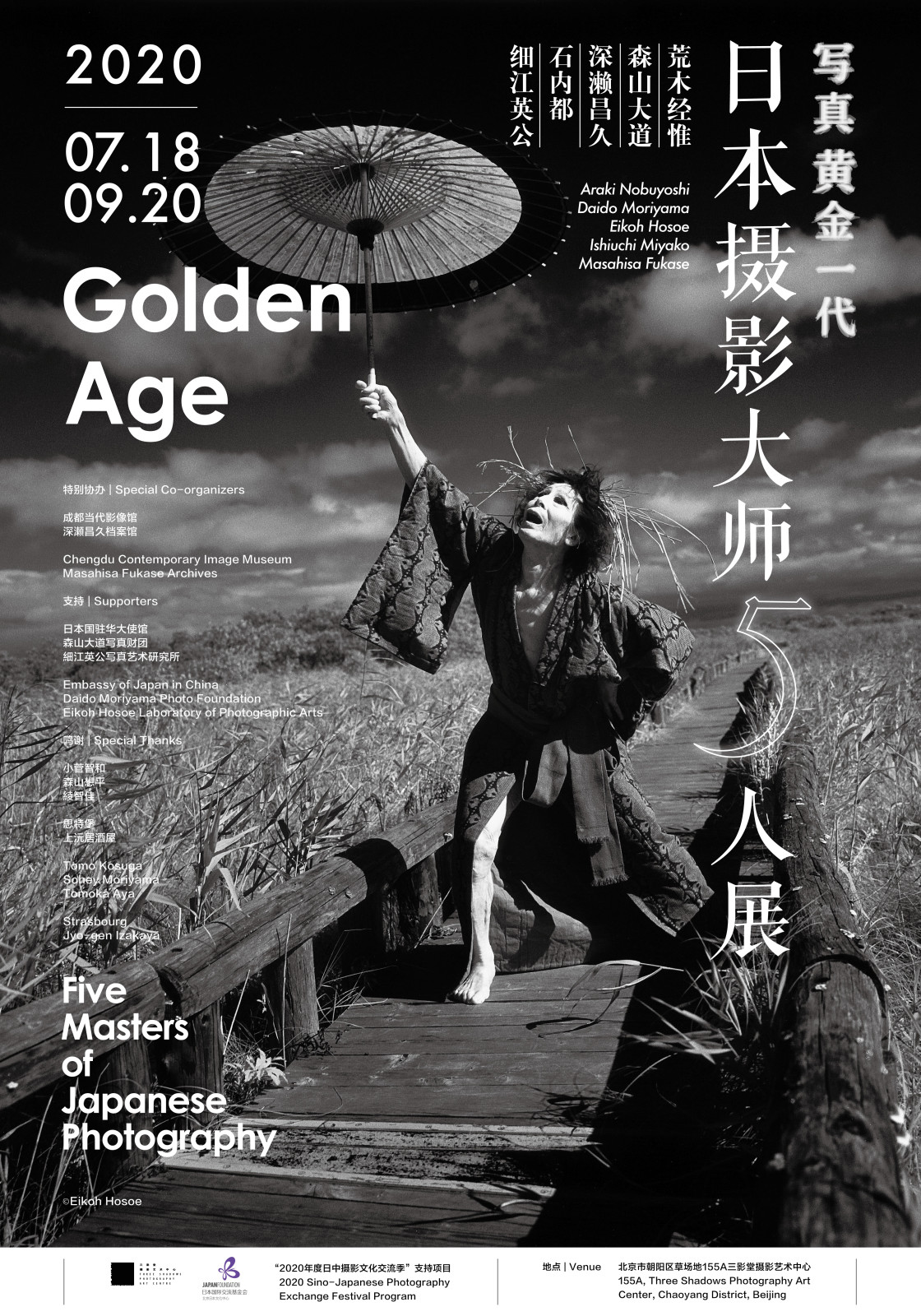 They emerged in Japan in the 1960s and 1970s, and influenced by their predecessors, they contributed fresh ways of working to the development of Japanese photography. They are now considered a golden generation that is influential even today.

Influenced by culture, politics, economics, and other factors, we as humans retain a sense of mental distance, and the thing we call reality produces an understanding that encompasses many different elements. This transcends the visual and points to a mental interaction. At the same time, we can only perceive the world through these appearances; it’s simply our mode of existence.
——Koji Taki, “The Metaphor of the Eye”

The exhibition presents the photographers’ most familiar and important works (Moriyama’s Hunter, Araki’s Sentimental Journey, Hosoe’s Ordeal by Roses, and Fukase’s Ravens), as well as Ishiuchi’s Moving Away, shown publicly for the first time. The exhibition does not follow a chronological path; the three sections “Under the Burning Sun,” “Eros and Provocation,” and “Eternal Void” link nearly fifty years of personal development that falls under these larger historical labels.

“Under the Burning Sun” presents pieces that show how the photographers’ times influenced their work. Eikoh Hosoe reconstructs childhood memories in Kamaitachi while Daido Moriyama captures the suffocating feeling of Tokyo’s back streets. “Eros and provocation” is fascinating and beautiful. Setting aside body politics, the works in this section give a wonderful response to the depression and gloom of the larger environment through the power of individuals and the beauty of their limbs.
Everything ends. Even the creators of this golden era have departed from stagnant history and confronted ordinary themes, such as the deaths of family members or self-exploration, all alone. “Eternal Void” presents a somewhat indeterminate conclusion. The peace of Ishiuchi’s beautiful street scenes extends to the present in which we find ourselves, but it also forces us to recognize that era is long gone.

Every generation of young people feels that the previous generation was full of rising stars, while their feet are still stuck in the mud, but what does it matter? As Takahiko Okada wrote in a poem in the final issue of Provoke:

Born in Tokyo in 1940, Nobuyoshi Araki completed his studies at Chiba University’s Department of Photography, Printing, and Engineering with a focus on the study of film and photography. His photographic project“Satchin” earned him the prestigious Taiyo Award in 1964, and shortly after he joined the advertising agency Dentsu, where he worked until 1972. At Dentsu, he met his wife Yoko, to whom he paid homage in Sentimental Journey, a photographic record of their honeymoon published in 1971. The interplay of eros and thanatos (sex and death) has been central theme in Araki’s work, which has also been driven by abiding fascinations with female genitalia and women’s bodies in Japanese bondage, flowers, food, his cat, faces, and Tokyo street scenes.

Daido Moriyama was born in Ikeda, Osaka Prefecture in 1938 and currently lives and works in Tokyo. He first trained in graphic design before taking up photography under Takeji Iwamiya and Eiko Hosoe, working as an assistant. He became an independent photographer in1964 and was involved with Provoke magazine. In 1972, he published both NipponGekijō Shashinchō (Japan: A Photo Theater) and Shashinyo Sayounara (Farewell Photography), showing the dark underbelly of urban life. He has had a radical impact on the worlds of photography and art in both Japan and in the West with his expressive “are, bure, boke” style (“rough, blurred, and out-of-focus”), characterized by his quick snapshots that sometimes come from forsaking the viewfinder entirely.

Masahisa Fukase was was born in Hokkaido in 1934, the son of a successful local studio photographer. He graduated from Nihon University College of Art’s Photography Department in 1956 and became a freelance photographer in 1968 following brief stints at the Nippon Design Center and Kawade Shobo Shinsha Publishers. Masahisa Fukase is considered one of the most radical and experimental photographers of the post-war generation in Japan. He became world-renowned for his photo series and book titled Karasu (known in English as Ravens, 1975-1985), which is widely celebrated as a photographic masterpiece. And yet the larger part of his oeuvre remained largely inaccessible for over two decades. In1992 a tragic fall left the artist with permanent brain damage, and it was only after his death in 2012 that his archives gradually came to light. Since then a wealth of material has surfaced that had never been shown before.

Ishiuchi Miyako was born in 1947 in Kiryu, Gunma Prefecture. In 1966 she began studying design and textiles at Tama Art University and went on to produce a series of acclaimed photographic works, including Yokosuka Story, Mother’s, and Apartment. She has consistently addressed themes such as existence and absence, people’s memories, and vestiges of time.

Eikoh Hosoe was born in 1933 in Yamagata Prefecture. In1951, Hosoe won the top prize for students in the Fujifilm-sponsored “Fuji Photo Contest.” He graduated from the Tokyo Junior College of Photography (now known as Tokyo Polytechnic University)in 1954, and in 1956 held his first solo exhibition, An American Girl in Tokyo. In 1957, he participated in the exhibition The Eyes of Ten, organized by photography critic Tatsuo Fukushima. This show introduced Hosoe to the photographers Kikuji Kawada, Akira Sato, Akira Tanno, Shomei Tomatsu and Ikko Narahara, and together they formed the independent photo agency VIVO. This agency positioned itself in opposition to the then-popular realist movement in Japanese photography, and instead developed more personal and subjective modes of photographic expression.