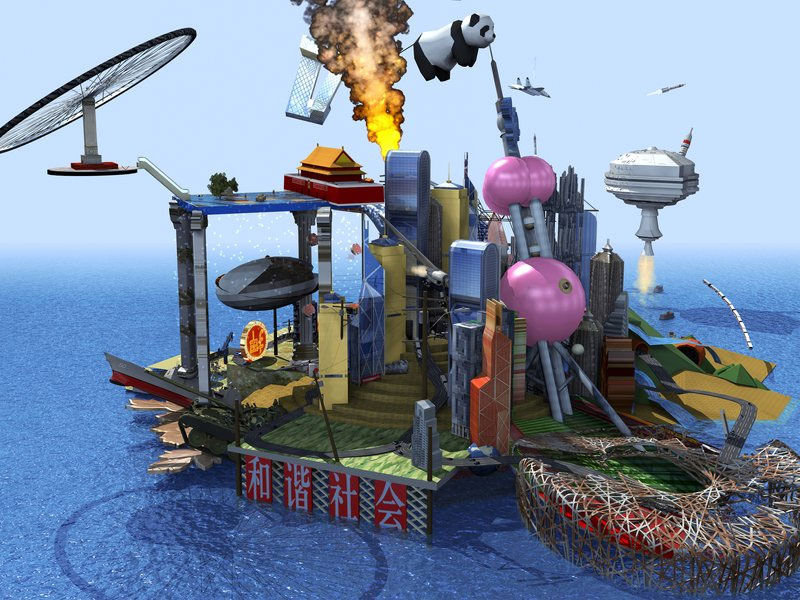 SAN FRANCISCO, CA (June 27, 2018) — Bracketed by the student protests in Tiananmen Square in 1989 and the spectacular pageantry of the Beijing Olympics in 2008, Art and China after 1989: Theater of the World presents an extensive survey of an historical period of Chinese contemporary art. It looks at the bold movements that anticipated, chronicled and agitated for the sweeping social transformation that brought China to the center of the global conversation. The exhibition was previously presented at the Solomon R. Guggenheim Museum in New York and the Guggenheim Museum Bilbao. The show’s West Coast debut examines how Chinese artists have been both critical observers and agents of China’s emergence as a global presence through a concentration on the conceptual and performative practices and social and political critiques of two generations of artists.

SFMOMA has a long history of presenting exhibitions of important contemporary Chinese artists. The museum organized Inside Out: Chinese Art in 1999 — the first exhibition in the United States dedicated to featuring works created since 1986 by artists from mainland China, Taiwan and Hong Kong as well as artists who emigrated from China. It has also presented Half-Life of a Dream: Contemporary Chinese Art from the Logan Collection (2008) and Photography Now: China, Japan, Korea (2009).

“Art and China after 1989 brings together a dynamic group of two generations of artists who were active during a transformative period within the history of China and Chinese art. This exhibition updates our audiences from where our watershed exhibition in 1999, Inside Out, left off and highlights the importance of continuing to challenge our assumptions about Chinese artistic traditions and the global impact that they and China have made on our world,” said Gary Garrels, Elise S. Haas Senior Curator of Painting and Sculpture.

Featuring the work of more than 60 key artists and artist groups living in China and abroad during the onset of globalization, Art and China after 1989: Theater of the World presents over 100 works of photography, film, video, painting, sculpture, ink, performance, installations and participatory social projects. These works from private and public collections around the world will be displayed in six thematic chapters that fill SFMOMA’s seventh-floor contemporary galleries.

Visitors will have their first encounter with Art and China after 1989: Theater of the World upon entering the Evelyn and Walter Haas, Jr. Atrium off the museum’s Third Street entrance. There, artist Chen Zhen’s dramatic Precipitous Parturition (2000), an 85-foot long writhing dragon sculpture created from found materials including bicycle inner tubes, bicycle parts and toy cars will be displayed suspended from the ceiling. The work offers a sly commentary on China’s dramatic transition from an analog nation of bicycles into a highly industrialized nation whose cars emerge from the belly of the dragon.

The titular work of the exhibition, Huang Yong Ping’s two-part installation Theater of the World (1993) and The Bridge (1995) opens the exhibition on the seventh floor. This two-part sculptural installation is a metaphor for accelerating globalization and explores the duality between social chaos and coexistence through a presentation of insects and reptiles inhabiting a cage-like version of the panopticon, an 18th-century structure created for omnipresent surveillance. SFMOMA’s installation of Theater of the World and The Bridge will replicate the altered presentation at the Guggenheim Museum in New York where, in response to vociferous protests, it was displayed without live insects and reptiles and with an accompanying artist statement. Two historic video works in the exhibition, Xu Bing’s A Case Study of Transference (1994), and Sun Yuan and Peng Yu’s Dogs That Cannot Touch Each Other (2003) also will be presented in deactivated states as in the New York presentation and will be accompanied by artist statements as gestures memorializing the works. Now part of the history of the exhibition and of the three works, these artist gestures contextualize the way in which the art works were met with criticism and protest prior to their actual display in New York.

Art and China after 1989: Theater of the World is accompanied by a 324-page catalogue published by the Guggenheim Museum and features essays from curators Alexandra Munroe, Philip Tinari and Hou Hanru, and annotated descriptions of the works on view with interpretive analysis by the curators and scholars Katherine Grube, Lu Mingjun, Stephanie H. Tung and Xiaorui Zhu-Nowell. It also includes an exhibition history of the period under consideration prepared by Anthony Yung and Jane DeBevoise of the Asia Art Archive, Hong Kong.

Art and China after 1989: Theater of the World is organized by The Solomon R. Guggenheim Foundation, New York.

The curators worked with an international advisory committee that has met under the auspices of the China Academy of Art, Hangzhou, and the Central Academy of Fine Arts, Beijing.

Art and China after 1989: Theater of the World Artists on View